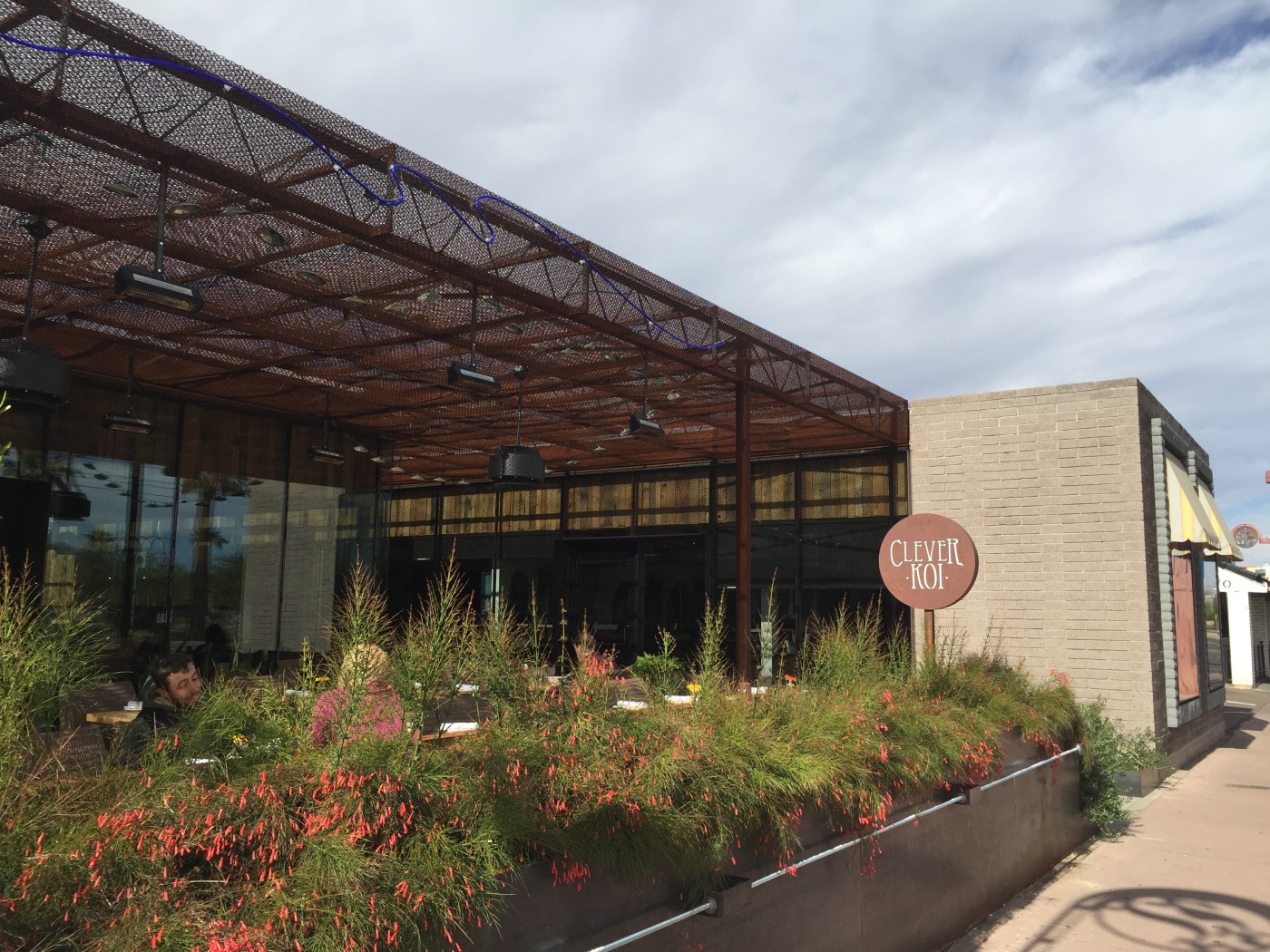 The colorful fish known as koi is just a few steps removed from ordinary gray carp. Centuries of careful breeding, blending both Asian and European varieties, has resulted in the vibrant animals stocked in so many lakes and aquarium tanks today. Likewise, some thoughtful cultivation of traits from numerous Asian cuisines, along with a few European influences, appears to have gone into creating the Clever Koi, a restaurant at the north end of Midtown Phoenix. Located just a block north of the Indian School / Central light rail station, the restaurant is now celebrating its first anniversary.

The restaurant occupies a recently remodeled mid-century building which also houses Central Wine and a hair salon. The walk from the light rail station is shortest from the north end of the platform near Monterosa Street, and bikes can be locked up at a long rack facing Central Avenue. The entrance is found in a breezeway that leads from the sidewalk back to the various businesses. Tables are available indoors and on a patio facing Central, but for those who like to watch chefs in action, some of the best seats are at a counter facing the open kitchen.

The chefs are alumni of the Parlor, a restaurant best known for pizza and pasta, so they’ve followed a slightly different path in opening a pan-Asian restaurant. Nevertheless, there are commonalities in terms of the use of starches. Noodles such as ramen and udon replace Italian pastas like fettucine, and dumplings take the place of pizza crust as a vessel for proteins and vegetables. The substantive differences between the chefs’ old and new cuisines are in the sauces, vinegars, herbs, and spices used to add myriad layers of flavor to each dish.

Dumplings and steamed buns are good candidates to pass around the table as the meal begins. The Clever Koi’s menu changes seasonally, but the “Pig Face” dumplings have been a presence on the menu throughout the entire first year. These appetizers pair pork with spicy, pickeled notes of kimchi, peppers, and the restaurant’s own signature sriracha sauce. That sauce, offered as a condiment at each table, is also available for take-home purchase and has a fresher taste than the popular rooster sauce sold at supermarkets, as beloved as that product is.

Other starters rotate several times a year, and some of the most appealing choices are found as snacks on the happy hour menu. Edamame fritters emerge from the fryer looking almost like hush puppies or johnny cakes. Their airy mass is permeated with bits of boiled soybeans. There’s an accompanying sweet chili sauce, but the house sriracha seems even better on them. Corn dog bites offer the chefs’ own interpretation of a food court favorite with an Asian sausage adding an element of complexity wrapped inside an indulgent coating.

Entrees at the Clever Koi are generally meals-in-a-bowl sized for one. Ramen choices vary with the time of year. Over the summer, a corn ramen was light in keeping with the season but still managed to turn out pleasingly unctuous due to the addition of miso butter to the broth. Cherry tomatoes added to the backyard cook-out feel of this dish, especially with an a la carte addition of grilled chicken seasoned with lemongrass. A spicy seafood hot pot is a more wintry selection with its assortment of shrimp and calamari intermingled with udon noodles in a broth redolent of cilantro and lime.

Rice dishes reinterpret American-Chinese staples such as Mongolian beef and sweet-and-sour pork, taking them in a different direction with less gloppy sauces and more discernible flavors than stereotypical renditions of these dishes seen elsewhere. The kimchi fried rice, prepared with a choice of protein, is unexpectedly one of the milder dishes on the menu. The fiery cabbage condiment is used sparingly and minced finely so that its impact on the overall character of the dish is relatively soft. All rice bowls are offered with the option of white or brown grain.

At lunch, the restaurant operates with streamlined menu that appears designed for value, flexibility, and speed. Basically, it’s a design-your-own-bowl concept that involves customers marking up a paper menu with their choices of noodles or rice, meat or tofu, myriad vegetables, and assorted toppings along the lines of pickled ginger. If the choice is a noodle soup, then a broth is also selected. It’s a simpler approach than the evening menu, and the tradeoff for fewer choices is a lunch tab that seldom excludes $10 per person unless beverages or dessert are added.

Desserts are simple with just two choices offered. First, there’s the option of bananas foster fritters accentuated with five-spice sugar and red miso caramel. In addition, each day there’s a different flavor of soft-serve ice cream. Chocolate cherry and cantaloupe have been among recent offerings. For liquid refreshment, the Clever Koi emphasizes a menu of artful cocktail choices, along with craft beer on tap, wine by the bottle or glass, and, of course, several varieties of sake. Grapefruit-lemongrass soda and ginger beer are appealing non-alcoholic selections.

While the restaurant is typically closed on Sundays, the Clever Koi has occasionally opened its doors on that slow night to feature collaborations with guest chefs from other notable Phoenix restaurants, including Welcome Diner and Crudo. Events like those probably help to keep the Clever Koi colorful. When no longer purposefully bred, koi revert to ordinary gray carp within a few generations. With one year of operation behind it, with lots of learning and refinement along the way, this Midtown koi seems poised to stay both colorful and clever for a while.