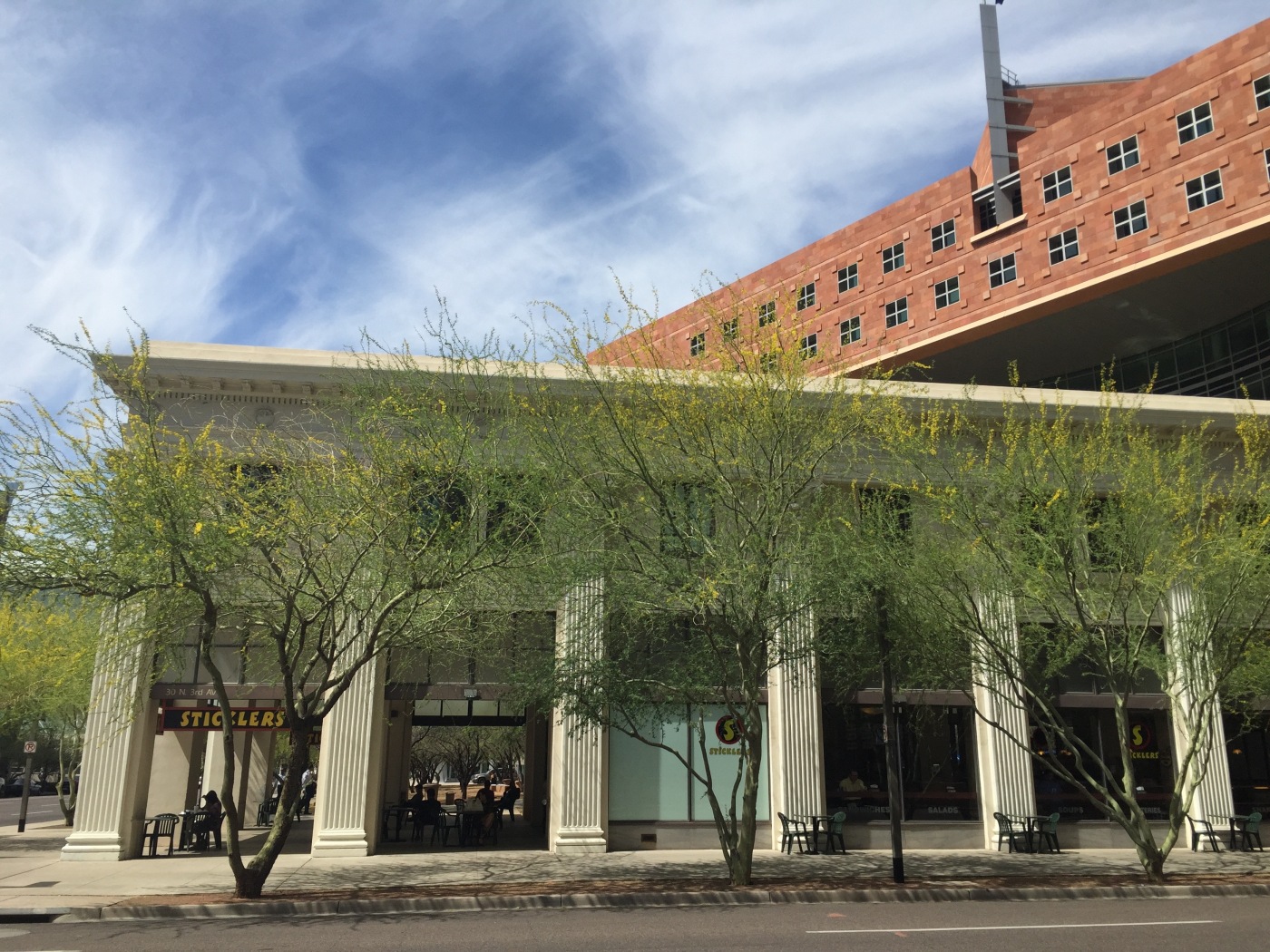 There are certain professions that might be seen as well-suited to sticklers, those who value attention to detail. Architecture and the law are among them. No architect wants a building to collapse due to faulty design, and the legal system is all about defining and interpreting rules, along with deciding consequences for those who violate them. It’s fitting then that a Downtown Phoenix sandwich shop called Sticklers is located next door to the Phoenix Municipal Court and just downstairs from the local chapter of the American Institute of Architects.

The building, named for its developer, J.W. Walker, is an historic structure sandwiched in between larger, newer government edifices. Its high ceilings and neo-classical revival style suggest a more exciting use for the space — maybe live music or a lively late night seen. Unfortunately, the lack of a residential base in this part of downtown makes evening hours a dubious prospect right now. As a result, serving sandwiches and salads to jurors, civil servants, and bank employees from nearby buildings is probably the most productive use of the space under current circumstances.

The entrance faces Washington Street, where many customers eat outside on the front patio. There’s a second, smaller patio on the west side of the building facing the courthouse. It’s accessible via the large interior seating area. Bike racks are found at the courthouse entrance with more across the street at Phoenix City Hall. Grid Bike Share is just a block away on Adams Street at Second Avenue, and light rail stops three blocks away at the Washington / Central (westbound) and Jefferson / First Avenue (eastbound) stations.

Sticklers can be a little confusing for a first-time visitor. There are big overhead signs indicating which way to turn for a sandwich, soup, or salad and which other way to go for ice cream, which is dispensed at a separate counter. The key is to turn right just before passing under those signs, not after. Anyone who waits too long to make a right ends up at the wrong end of the line, where finished sandwiches are paid for. Instead, turn early and head to the back of the restaurant. There, separate order stations for sandwiches and salads are found.

If that sounds about as clear as mud, just follow the regulars to end up in the right place. The sandwiches at Sticklers are toasted with their meat and cheese ingredients placed upon white or whole wheat rolls. As they emerge warm and crisp, they’re dressed with whatever condiments the customer requests: lettuce, tomato, mustard, mayonnaise, Italian herbs, sliced pickles, oil, and hot peppers. The last item is the Sticklers version of giardiniera, the Italian-American condiment of pickled vegetables packed in oil. The product is even sold by the jar for use at home.

The signature sandwich at Sticklers is the Traffic Jam, a four-meat combination of turkey, ham, salami, and roast beef. It’s a packed and filling creation, particularly when ordered in its full twelve-inch length. Simpler sandwiches with just one meat are of course available, and there are two vegetarian choices: one is a typical assemblage of cheese and vegetables and the other is a pizza sandwich made with marinara sauce, sliced mushrooms, and melted provolone. The slightly sweet marinara also plays a prominent role in the meatball sandwich.

All sandwiches are also offered in half sizes appropriate for smaller appetites or combination meals with salads or soups. A sign on the door advertises a special combination deal on Fridays, but there’s a less publicized yet more straightforward special every day of a half single meat sandwich with a cup of soup. Chili and chicken noodle soup are always offered, and each day there’s a different vegetarian soup. Among the meatless soups, there are expected choices such as potato-leek, but also some surprises like zucchini with roasted garlic.

Salads are fully customized creations reflecting each customer’s preferences, but they are assembled by staff behind a counter, not by the customer at a self-service salad bar. It’s an arrangement that requires some awkward pointing at items stored behind a plastic barrier. Staff then put together either a small salad with four toppings or a large one with unlimited add-ons, including “crunchers,” ingredients such as sunflower seeds that add as much texture as flavor. Unless the request is just for oil and vinegar, the dressings are packets of Newman’s Own.

For dessert, Stickers offers banana bread and cookies, both made on the premises. There’s also a separate line on the other side of the restaurant for ice cream, smoothies, shakes, and malts. Chocolate and banana seems to be the most popular flavor combination over there. Sticklers also functions as a place for breakfast, at least continental breakfast, with a selection of bagels, pastries, juices, and oatmeal. As is usually the case with daytime-only hours, there’s no liquor license. Fountain sodas and bottled juices make up the beverage selection.

While it may be frustrating to see the J.W. Walker building dark at nights and on weekends, there’s reason to be happy it has survived at all given the spotty record of historic preservation in Phoenix. There may come a time when this space is lively after dark, but, for now, its current ground floor tenant, Sticklers, is a welcome choice for a quick lunch break during the workday or jury duty. Architects and attorneys can focus on the specialized details of their respective professions, but at this restaurant anyone can be a stickler about sandwiches and salads.