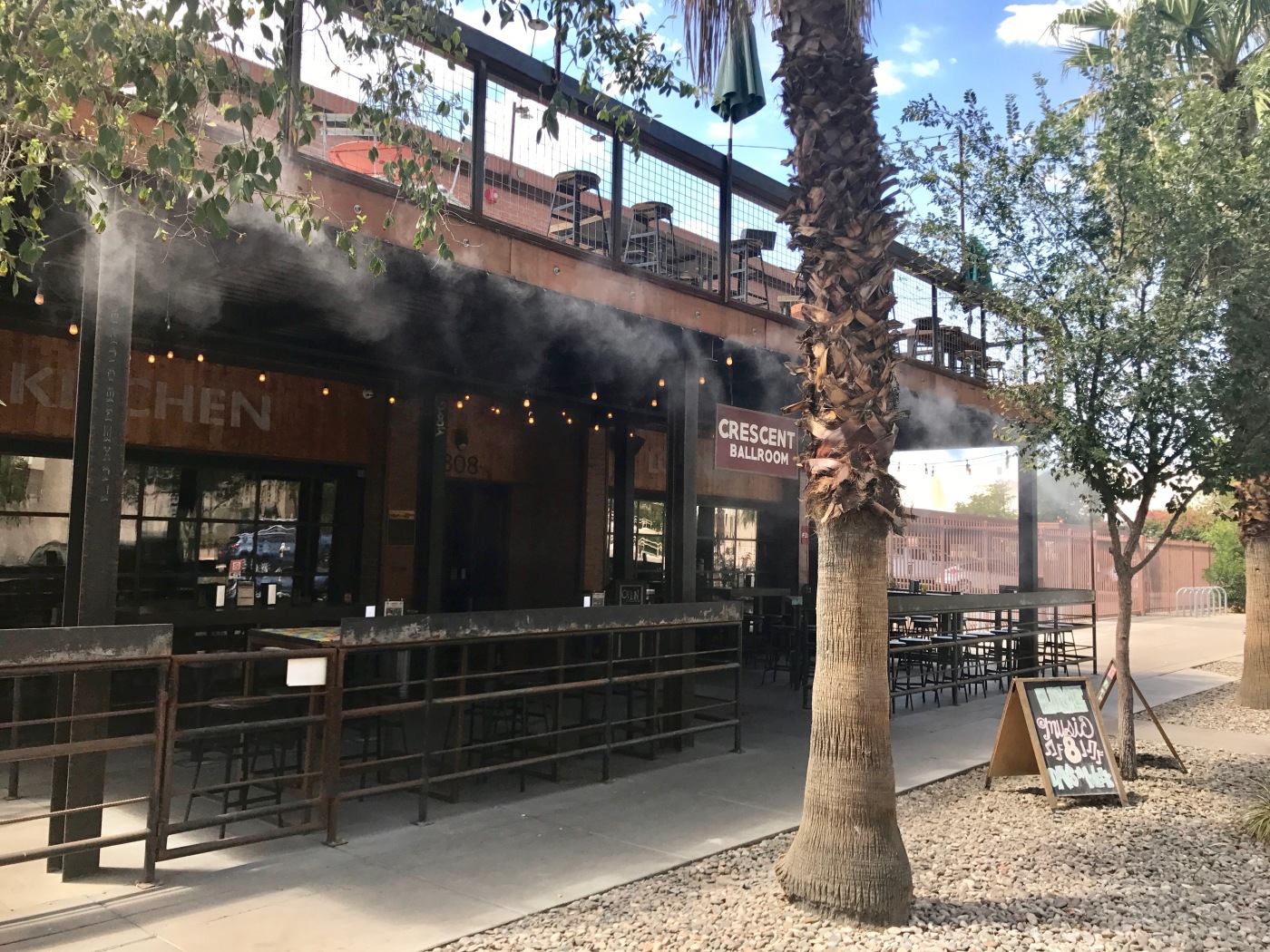 More often than ever before, music and food seem to go together. It’s not just about playlists that set the mood for a dining room. It’s about recording artists like James Murphy, formerly of LCD Soundsystem, opening a wine bar in New York. It’s about food-centric writing such as the Guardian columns penned by Alex Kapranos of Franz Ferdinand, later published as a book entitled Sound Bites. In Phoenix, a favorite live music venue, the Crescent Ballroom, has responded to the trend in its own way by creating Cocina 10, a lounge and restaurant that goes beyond the minimal grub offered at most concert halls.

Cocina 10, sometime also referred to as “the Lounge” by Crescent staff, is essentially the foyer of the ballroom. It’s a moderately sized dining room with a small bar and a large patio recently expanded to include a second story that shades the outdoor space at ground level. The location is just a block west of the Central / Van Buren (westbound) and First Avenue / Van Buren (eastbound) light rail stations, the two platforms on opposite sides of the big transit center known as Central Station. Abundant bike racks are found just north of the Crescent Ballroom along Second Avenue.

While the Crescent Ballroom usually has minimum age requirements in place for its concerts, Cocina 10 is all-ages until 9 PM, so it’s fine to bring the family along. More importantly, no concert ticket is required to eat and drink in the lounge, even if a big show is going on inside the ballroom that evening. The result of these enlightened policies is a situation in which Cocina 10, while a convenient place to eat before a show, also functions as a restaurant in its own right, drawing a lunch crowd from nearby offices that overlaps only minimally with evening concert audiences.

Cocina 10’s ability to create its own identity apart from the Crescent Ballroom comes from the quality of its food, which never feels like an afterthought in comparison to the concert bookings. When the Crescent Ballroom opened in 2011, the original menu was created by Chris Bianco of the legendary pizzeria that bears his name and Doug Robson of Otro Cafe. The “10” refers to the interstate that runs under nearby Hance Park, and the theme is road foods of the Mexican border. With continuous minor changes along the way, that approach has persisted since opening day.

Unlike a lot of Mexican restaurants, Cocina 10 doesn’t bring a complimentary bowl of chips to the table, but they’re available for a small charge and come with squeeze bottles of a green tomatillo salsa and a red chile de arbol sauce. As one might expect, the green is spicier, but the red has more nuance and depth. Chips, along with both condiments, come at no cost with any order of tacos or a burrito. A worthwhile upgrade is the chunky guacamole flavored with roasted tomatoes, slices of jalapeno, bits of citrus, sprigs of cilantro, lime juice, and cotija cheese.

Since some of the foods served in Cocina 10 are also available from a more limited menu inside the Ballroom, it’s easy to understand why many are hand held foods. Burritos start with a simple yet satisfying Poquito Bean and Cheese option. The classic mix of frijoles and dairy is upgraded with a mix of tillamook sharp cheddar and oaxaca cheese. Al pastor pork, barbacoa, carne asada, chicken, and shrimp are all available as fillings, and a second vegetarian burrito goes beyond beans and cheese with the addition of zucchini, squash, peppers, onions, mushrooms, and potato.

Tacos at Cocina 10 are all served a la carte. Most appetites will be sated with a trio of them, or maybe just a pair with a side of rice, beans, or both. Each taco contains a generous serving of fillings — carne asada, two types of chicken, barbacoa, al pastor pork, vegetables, fish, or shrimp — pushing against the confines of a medium sized corn tortilla. All are discounted during happy hour. Newer menu additions include a trio of chicken enchiladas with black beans and rice, as well as “vampiros,” tostadas topped with cheese, cabbage, red onion, and choice of beef or chicken.

The barbacoa and tinga meats used in tacos and burritos are also available inside a bun as part of a torta, or Mexico City sandwich. Each of these comes with a generous array of toppings and a side of house-made potato chips with chipotle aioli. Cocina 10’s take on the hamburger is the Lalo Burger, given a Southwestern touch with spices mixed in the patty and an anaheim chili on top. Of course, one border road food not to be overlooked in a Sonoran hot dog. In this case, it’s a Schreiner’s all-beef dog in a toasted bolillo bun full of beans, bacon, and myriad condiments.

For anyone willing to dispense with the idea of eating by hand, meals requiring a fork include not only a no-tortilla burrito bowl, but some entree-sized salads. The Cocina 10 Ensalada and the Sonoran Caesar both derive texture from garlic tortilla chips and substance from roasted corn and black beans. Blackened salmon salad adds fish and a bit of fruit to the usual bowl of greens. Eating salad might leave just enough room for dessert. In that case, the “bag of donuts” is suitable for sharing. The rice pudding is a lighter dessert for suitable for one.

Although the connection between music and food might seem new, drinking at concerts is a time-honored tradition. Cocina 10’s bar concentrates of a tight selection of beer and wine. Lucha Libre Lager is the house bargain draft, and some craft brews expand the selection. Cocktails are served as well, with a Honey Badger as the main happy hour special. Good food and music should go together. At Cocina 10, they often do — but due to the restaurant’s quality and its distinctness from the club directly behind it – they don’t always have to.