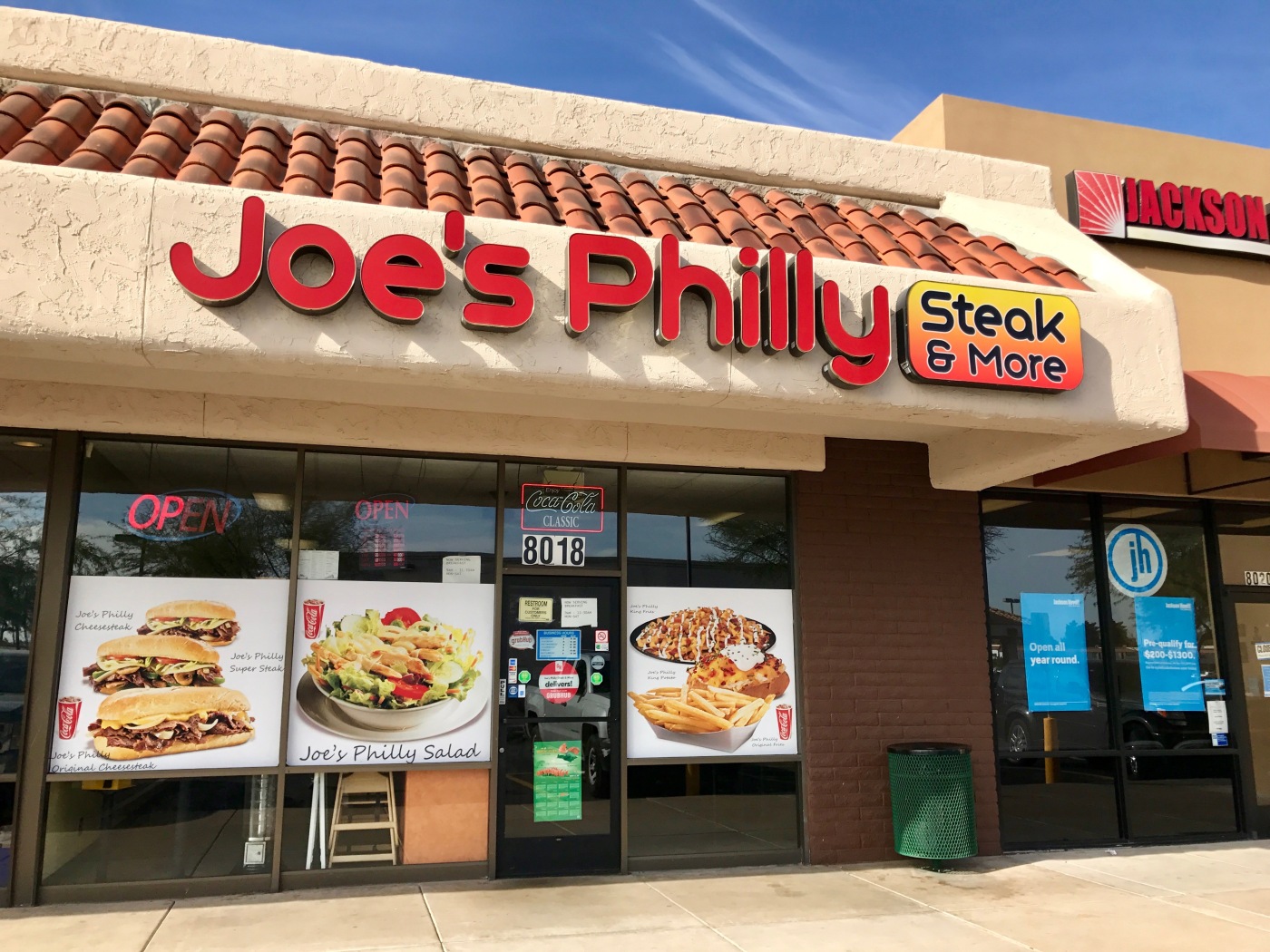 It’s been less than a week since just over 100 million viewers saw the Philadelphia Eagles win their first Super Bowl. In the City of Brotherly Love, that victory was met with a mix of civic pride, a celebratory parade, and, unfortunately, some rioting and looting. On the other side of the country, distant from both teams involved, a celebration can be as simple as enjoying a signature Philadelphia food, the cheesesteak. On the north side of central Phoenix, Joe’s Philly Steak & More offers a simple venue for a classic sandwich no matter who is winning what sport.

Joe’s is located in a shopping center diagonally across the street from the 19th Avenue / Northern station. Look for the restaurant near Bookman’s and Sprouts, the two anchors of the retail plaza on the northwest corner. Bike racks are found between those two major tenants. The windows covered with posters promoting Joe’s specialties — cheesesteaks, baked potatoes, and fries — are confirmation that this is the right place. Inside, the space is sparse and minimally decorated. Order at the counter, grab a seat, and wait to be called back to pick up the food.

Joe’s has one menu on reader boards over the counter and another one printed as a brochure. The overhead version seems to be condensed, featuring the most popular options, while the paper menu adds a few more. Either way, the vast majority of Joe’s customers are here for a sandwich — maybe traditional, maybe a little more inventive — but always inspired by the Philadelphia tradition. The cheesesteaks come in a large size, which is enormous, and regular, which is right for most appetites, especially when paired with fries in a combo.

All of the variants on the cheesesteak feature tender minced beef inside a soft white roll with the finished product being cut into two for easier handling. The Joe’s Philly sandwich is a simple eponymous dish with grilled onions and provolone. The Original Philly uses cheese sauce instead of provolone, and the Super Steak has the most to offer with toppings of onions, peppers, mushrooms, and provolone. While provolone is usually the default cheese choice, Swiss, American, cheddar, and the inevitable Cheez Whiz are available upon request.

Beyond the traditional cheesesteak, Joe’s offers a multitude of sandwiches based on the same basic model but with alternative choices of meats and sauces. The California Turkey mixes bits of breast meat with tomato, onions, Swiss cheese, ranch dressing, and, in an unusual move, cooked cucumbers. The Chicken Teriyaki sandwich is a surprisingly successful amalgam of sweet, salty sauce with melted swiss cheese and white meat poultry. The Ham Delight involves pineapple and Swiss in a combination reminiscent of the love-it-or-hate-it Hawaiian pizza.

With any of these sandwiches, a combo meal is usually the best value, and Joe’s fries make the extra charge worthwhile. The crisp fries are cut thick with plenty of skin left on the potato slivers. The Cajun fries add a mix of spices, and the King fries add melted cheese, sour cream, bacon, and chives. While the fries are a worthy side, Joe’s also makes baked potatoes that are in a meal in themselves. The King baked potato is lavished with exactly the same ingredients as the fries, while Joe’s Potato is layered with the customer’s choice of meat, cheese sauce, and grilled onions.

For additional ways to flavor a potato, Joe’s has ketchup and malt vinegar at the counter and hot sauce on request. While the strengths of Joe’s lie in sandwiches and potatoes, there are a few other menu items — some catering to low-carb diets and others every bit as indulgent as the cheesesteaks. A few salads combine meats with greens without the starch of bread or potatoes. A “big, sloppy cheeseburger” is exactly as it sounds, and gyros come in a sandwich or plate format. A small children’s menu offers a miniature cheesesteak sandwich or a simple grilled cheese.

In keeping with its simple, straightforward approach, Joe’s offers few beverages beyond fountain drinks and iced tea. Likewise, there is no dessert, except a small selection of candy for sale at the counter. Then again, cheesesteaks and potatoes leave little room for beer, wine, or sweets. It may have taken a long time for the Philadelphia Eagles to win a Super Bowl, just as it took a long time for train tracks and rail service to reach Northern Avenue. Now that both milestones have been reached, it’s easy to enjoy a cheesesteak in Phoenix, even if the New England Patriots win again.