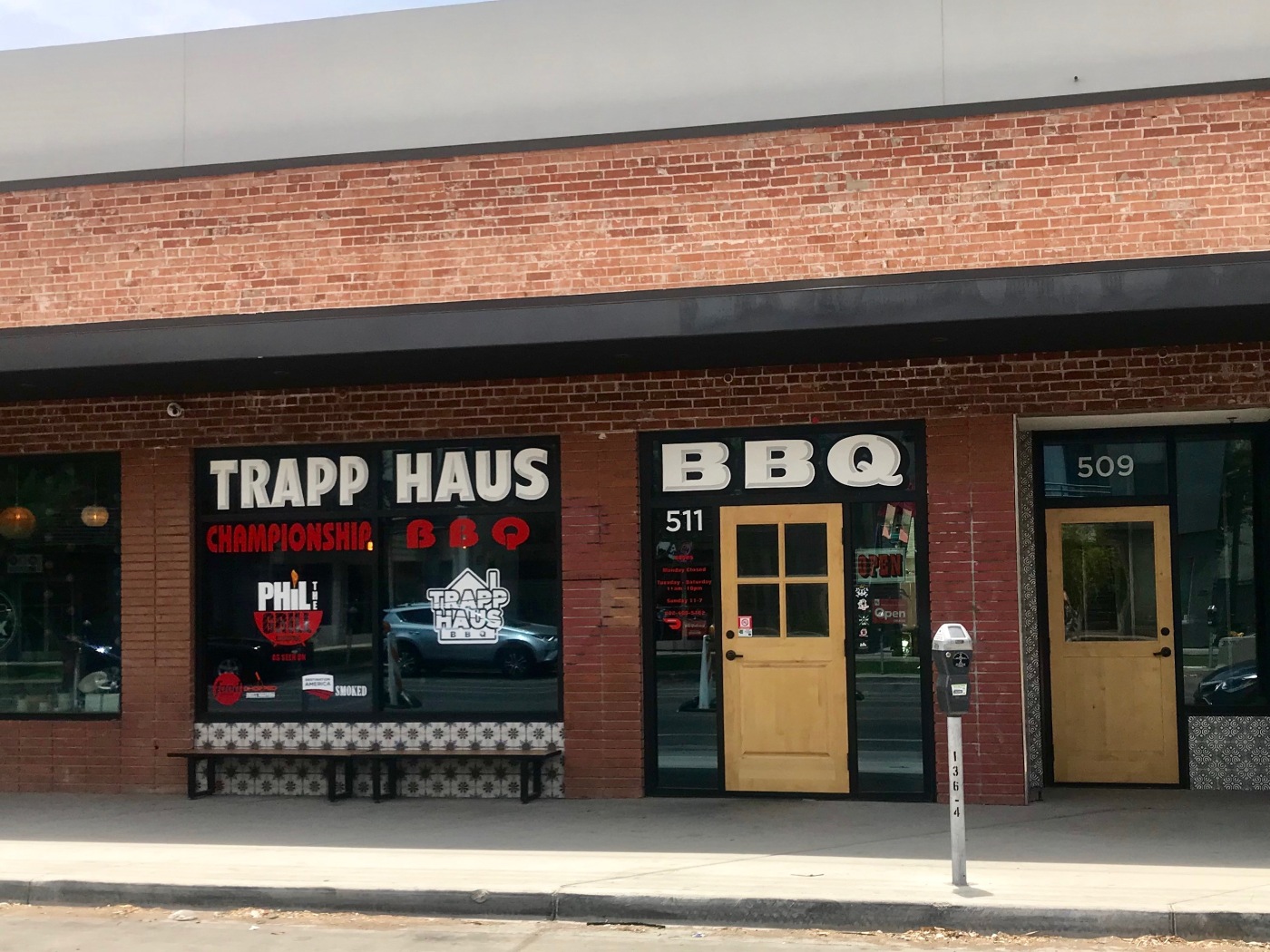 Barbecue is one of those foods that doesn’t automatically seem at home in an urban environment. In cities that are known for their barbecue culture, the most celebrated restaurants are sometimes found in outlying locations or industrial areas. Part of the challenge of serving barbecue in the city lies in the smoking. Meat scents that may be enticing at lunch or dinner can become overwhelming to those who live or work near a smoker every single day. Even without strong odors, barbecue’s rural roots can make its aesthetics at odds with a downtown setting.

That said, there’s still an appetite for barbecue in a walkable, urban setting, so anyone that can make “city ‘cue” work is likely to gain a following. That’s what seems to be happening on Roosevelt Row with Trapp Haus BBQ. The restaurant, which opened in early 2018, is part of the Blocks of Roosevelt Row development, five blocks east of the Roosevelt / Central light rail station. While the Blocks projects has renovated a vintage building and drawn a good mix of tenants, one detail has been overlooked: bike racks. Find one around the corner on Fifth Street.

Trapp Haus is a casual, order-at-the-counter operation. Customers place their orders up front, and occasionally the line goes out the door onto the Roosevelt sidewalk. There’s a small bar next to the counter, and a dining room around the corner with high-top tables under a mural from Jesse Perry (aka “Mr. Downtown Phoenix”) depicting the restaurant’s proprietor, “Phil the Grill,” in his city setting. On the opposite side of the room, a counter faces a wall covered with words and phrases associated with barbecue. A small patio provides additional seating in back.

Trapp Haus has already departed from barbecue tradition with its urban setting, so it makes sense that the menu also incorporates some non-traditional elements. That includes dishes that are boldly sauced, a few that combine different culinary cultures, and some that combine meats and sides that would typically be separate on a plate into a single meal-in-a-bowl. Starters include smoked brisket empanadas, two little pastry pockets surrounding tender minced beef, and “mac rolls,” similar to egg rolls in shape but with an interior of brisket with mac-and-cheese.

The main dishes are aligned in three main categories: sandwiches, “no bun” bowls, and platters. The sandwiches begin with the Classic, pulled pork or brisket, both tender with a bit of “bark”or crispy exterior, dressed with a bit of “Sweet Heat” sauce, and served on a bun. A pastrami reuben combines barbecue and deli influences into a single sandwich in which thick slices of meat are topped with coleslaw and Russian dressing and bookended with slices of marble rye. The Philly Cheese Fix tops brisket with melted cheese, peppers, and onions in a hoagie roll.

The bowls may not have any buns or bread, but they’re quite hearty in their own ways. The mac bowl is a base of creamy mac-and-cheese topped with a choice of meat: pulled pork, brisket, chicken, or, the latest addition, smoked crab. The Phat Bowl offers the same meat choices mixed with baked beans and jalapeno coleslaw. Both add OMG barbecue sauce, a mixture of the restaurant’s sweet and spicy condiments, to the bowls. If those two choices sound too indulgent, there’s also a salad bowl that places the meat on top of a lighter base of greens.

The barbecue platters are, as expected, the most filling meals on the menu. In addition to the various meats available in the salads and bowls, there are hot links and ribs. The latter are St. Louis style, a fattier cut than baby back. Any two meats can be combined for an even heftier meal. All the platters come with a choice of two sides. The fries are waffle cut and mildly seasoned. Grits, potato salad, and mac-and-cheese are other starchy sides. The baked beans are sweet and tangy, and the Mean Greens (collards) have a nice bite from a splash of vinegar.

Trapp Haus augments its regular menu with daily specials, often corresponding to a particular day of the week. On Wednesday, short rib is featured, either as part of a platter or in a sandwich. While the plentiful fat in short ribs is usually rendered when the meat is braised in a pot roast, that process does not occur in smoking. The result is a sandwich with rich flavor, but also a surfeit of discernible fat. Smoked salmon, usually featured alongside other seafood specials such as fried shrimp, is a refreshing alternative to the usual barbecue meats.

On Sundays, Trapp Haus features a “Soul Brunch” with added entree choices like shrimp-and-grits. There is no dessert on the menu, but for anyone who still has room after all that barbecue, Tammie Coe is across the street with a shop full of cakes and cookies. Trapp Haus offers bottled sodas, teas, wine, and beer to drink. The selection is relatively small, but there are appealing local choices such as Helio Basin’s 602 Brew. Happy hour specials include not only discounted drinks but also economy prices on the restaurant’s appetizers.

Trapp Haus’ generous use of sauces, as well as its playful mingling of barbecue traditions with outside influences, may put it outside the comfort zone of some barbecue purists. The menu does not align strictly with any one particular regional style, and its address does not fit the usual model of where barbecue can be found. Nevertheless, Trapp Haus has settled nicely into its Roosevelt Row location, demonstrating that even if slowly smoked meat is often seen as a country tradition, this particular type of “barbecue in the city” can work on its own terms.