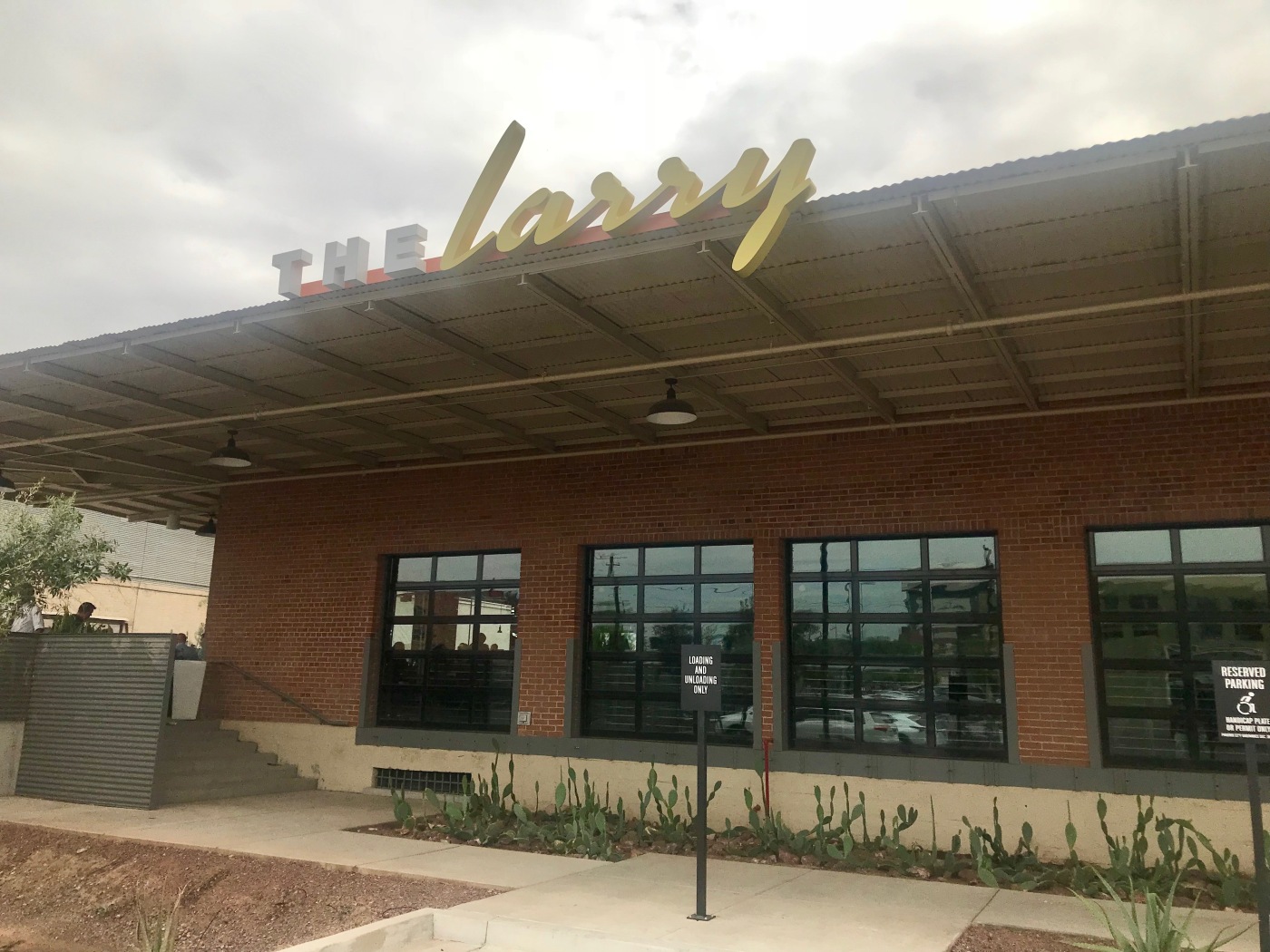 Phoenix’s Warehouse District, located just south of downtown, has become something of a mini tech hub in recent years. With companies like WebPT occupying the vintage buildings found south of both the light rail and the Union Pacific freight railroad tracks, the area has received national media coverage and increased attention from the city’s economic development department. Where there are tech companies, there’s a need for places to eat and gather. It’s not uncommon to see food trucks parked outside certain buildings, but until recently, there have been few established eateries.

The Larry is a first step in changing that landscape. It’s a place that feels like a blend of a restaurant and a tech company cafeteria, serving breakfast, lunch, and early dinner to Warehouse District employees and visitors. The restaurant takes its name from the Lawrence Building, a structure on Grant Street that has recently become home to the Phoenix location of Galvanize, a co-working space and technology training center. With Galvanize in the western half of the building, the Larry takes up the eastern section, with some room left for more tenants to come.

The Larry is half a mile south of the eastbound Third Street / Jefferson light rail station for and its westbound counterpart, the Third Street / Washington station. A slightly closer pair of stations are planned where Lincoln Street meets Central and First Avenue as part of the South Central light rail extension. A series of rather stern signs are found around the building’s perimeter. They seem to be motivated by a parking shortage in the Warehouse District, and those arriving on foot or via bicycle should encounter no problems with access. Ample bike racks are found on both sides of the building’s main entrance.

Walk up a few steps and turn left to find the Larry. There’s also a ramp at the east end of the building near the Larry’s patio. Where there are tech companies, there’s usually a bit of pretense, and the Lawrence Building is no exception. Elevators are identified by the British word “lift,” and the Canadian term “washroom” is used to signify where the toilets are found. The Larry’s space blends seamlessly into the building’s lobby. Printed menus are found in a holder placed on a column near the counter. If there’s a long line to order, one alternative is to sit at the full service bar in back.

The all-day menu begins with a breakfast section featuring serviceable renditions of classics like buttermilk pancakes, as well as Southwestern favorites such as a breakfast burrito and chilaquiles. The brulee ruby red grapefruit, along with some fresh-squeezed juices, provide some tart-and-sweet accompaniments to the mostly savory breakfast fare. The grab-and-go case located by the counter usually contains some cold oats, a breakfast-on-the-run treat familiar from be Coffee + Food + Stuff, an establishment originally operated by Larry’s parent organization, Conceptually Social.

While breakfast is served all day, by midday, lunch items start to dominate the table tops throughout the roomy dining area. The Larry’s burger and patty melt will appeal to those who want well-prepared all-American familiarity. The KFC (Korean fried chicken) and the BBQ pork bahn mi add some subtle Asian influences. Occasional specials such as a towering shrimp po’ boy add variety. Two meatless choices are a veggie burger and an “inside-out grilled cheese” in which the melted dairy appears not only between the slices of bread, but also in a crisp form on the exterior.

Sandwiches come with fries by default with the option to add any other side for a few dollars more. These accompaniments, all of which are available in a larger serving a la carte, can be worth the expense. The hash brown fries are rectangular cakes of griddled potatoes topped with a little parmesan. In the Bang Bang Broccoli, the familiar vegetable is coated with panko breadcrumbs and enlivened with bonito flakes. The fried mac-and-cheese bites recall arancini but substitute an interior of creamy pasta and dairy for the usual risotto. A cup of the daily soup can also function as a side.

Lighter entrees include a cold soba noodle salad with an egg, enoki mushrooms, and shaved carrots. A grain bowl built on a foundation of kamut and quinoa is available in a large format as an entree-sized salad and also in a smaller size to function as a side dish. Pizzas are sized for one hungry person or for two to share with a salad or side. Standard varieties offered every day on the menu come with established toppings such as pepperoni and mushrooms, but a chef’s daily pie showcases some variety and ingenuity such as a spicy Hawaiian with bacon, pineapple, and jalapenos.

The menu does not mention any desserts, but plenty of pastry is found on display at the counter. Options usually include some giant cookies familiar from be Coffee, as well as a few kinds of donuts. The refrigerated case just around the corner from the counter is also where packaged salads and off-menu items like sushi assortments can be found. In this sense, the Larry is truly functioning like a tech company cafeteria, augmenting hot, plated meals to be consumed on site with convenient takeout options ready for immediate consumption at one’s desk.

One aspect of the Larry that doesn’t conform to cafeteria stereotypes is its full bar. Nevertheless, the Larry is as much a public restaurant as it is an office dining room, and alcohol is not unheard of in the creative workplace. The Larry serves its own original cocktails, along with wine and ten tap handles worth of craft beer. With this venture, Conceptually Social has expanded its reach from Roosevelt Row on the north side of downtown to the Warehouse District on the south side. If the workforce in that area continues to grow, more “Larrys” are likely to follow.