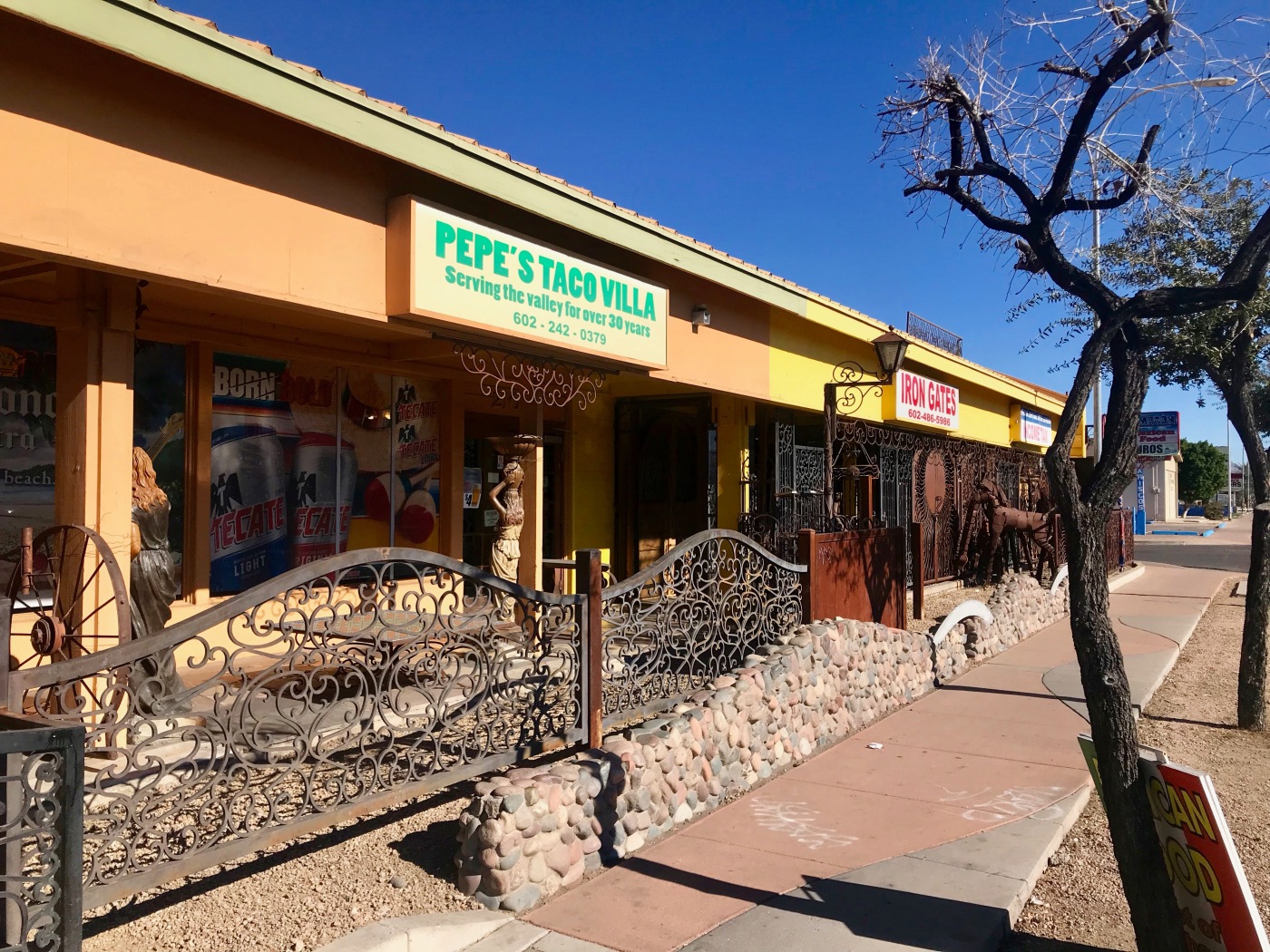 From gringo-safe chains to hole-in-the wall taquerias, the streets of Phoenix are lined with Mexican restaurants — except much of that food had traditionally been more “border” than “south of the border.” In other words, many local favorites serve Sonoran food, associated with Arizona and the Mexican state of Sonora directly below it on the map. In recent years, migrations from other regions of Mexico have diversified the food choices in Phoenix, but it’s important not to forget restaurants that offered Mexican beyond Sonoran long before it was fashionable to do so.

Pepe’s is one of those old school Mexican restaurants that never allowed itself to be pigeonholed as exclusively Sonoran. The original Pepe hailed from Monterrey, Mexico’s third largest metropolitan area and a center for commerce and industry. It’s not a border city, but it’s not a seaside resort town either. Instead, it’s probably about as close to the Mexican heartland as can be imagined. The word “heartland” connotes stability, and the restaurant has existed since 1981 in a storefront two blocks west of the 19th Avenue / Camelback light rail station.

Now under the management of a second generation within Pepe’s family, the restaurant has undergone some expansion, leading to a potentially confusing situation with three different doors facing the street. If approaching from the rail station, go past the bus stop and then look for the double doors behind the fence in front of the storefronts. There is no bike rack, but it’s possible to lock up using one of the posts outside the restaurant. Just be careful not to inadvertently secure personal transport to the metal furniture displayed on the patio of the neighboring store.

The restaurant’s interior is an ad-hoc mix of beer promotional decor, pictures of matadors, and even some Frida Kahlo prints. Most of the seating is in high-backed booths, although there are a few sunnier tables near the windows. A bar counter is set back inside the restaurant, and there’s also a second dining room suitable for large groups. In each setting, service always begin with a basket of fresh chips and two salsas in squeeze bottles. The red is mild, and the green is hot. Another option is to order some of the creamy guacamole to go with the chips.

Just like the foods often associated with the heartland in the United States, Monterrey’s cuisine is oriented heavily toward beef, chicken, and pork but little in the way of seafood. Shrimp tacos have been featured at times as a special, and they’re always available as an enchilada filling but crustaceans are the only aquatic item at Pepe’s. More typical of Pepe’s menu is a mix of familiar staples such as tacos, enchiladas, burritos, and chimichangas with fillings of beef, pork, chicken, or cheese. These classics exist side-by-side with regional dishes and day-of-the-week specials.

Sunday is mole day at Pepe’s. Actually, every day is mole day here with the #14 combination of shredded white meat chicken rolled into three enchiladas covered in mole poblano sauce. The mole at Pepe’s is complex with notes of chocolate, peppers, and many other flavors not so easily identified complimenting, rather than competing, with one another. The bonus on Sunday is that on that day the mole sauce is also served with whole pieces of chicken, including the option of dark meat for those who appreciate poultry beyond skinless, boneless breasts.

Creamy chicken mushroom enchiladas on Wednesday offer a bit of mid-week comfort food, and a bolder dish of barbacoa de cabeza (cow’s head) is available on weekends. For anyone trying to start the week on a virtuous note after a weekend of indulgence, the Monday night special is caldo, a big bowl of soup with chicken or beef. Not only is this dish lighter than most of what’s on the menu, but the lively broth is loaded with sprigs of fresh cilantro and vegetables — big hunks of carrots, small slivers of celery, a corn cob, and an entire potato.

Of course, most of the menu is available every day the restaurant is open. That means over a dozen order-by-number combo plates such as #10, spicy pork soft tacos, and #6, rolled chicken tacos with guacamole and sour cream. Predictably, all these come with rice and beans, but for 50 cents more, it’s worth upgrading to the olla beans, whole pinto beans with sliced jalapeños and bacon. House specialties include the Taco Monterrey, filled with machaca and eggs, and Taco Siberia, full of chicken, guacamole, and crema.

For dessert, the natural choice is the flan. It’s not quite as custardy as the same dish at most restaurants. Expect a firmer texture and a bit more cake-like consistency with a dollop of whipped cream on top. It works well in its own way, and the serving is generous enough to make sharing a wise move. Pepe’s bar features margaritas, both the standard variety with salt on the rim and frozen fruit flavors such as mango, and the usual Mexican bottled beer selections. The best non-alcoholic choices include horchata and bottled Mexican Coke.

With the restaurant now more than three decades old, Pepe’s may seem old school, but its regional Mexican offerings are probably more relevant today than ever. Anyone used to Sonoran food can find the usual suspects here, but there’s also room to explore and branch out. Pepe’s has stayed much the same even as the surrounding Alhambra neighborhood has changed with the construction of light rail and the steady expansion of Grand Canyon University. Since Pepe’s was already a little different to begin with, maybe a little heartland continuity is fine just as it is.

One thought on “Pepe’s Taco Villa”