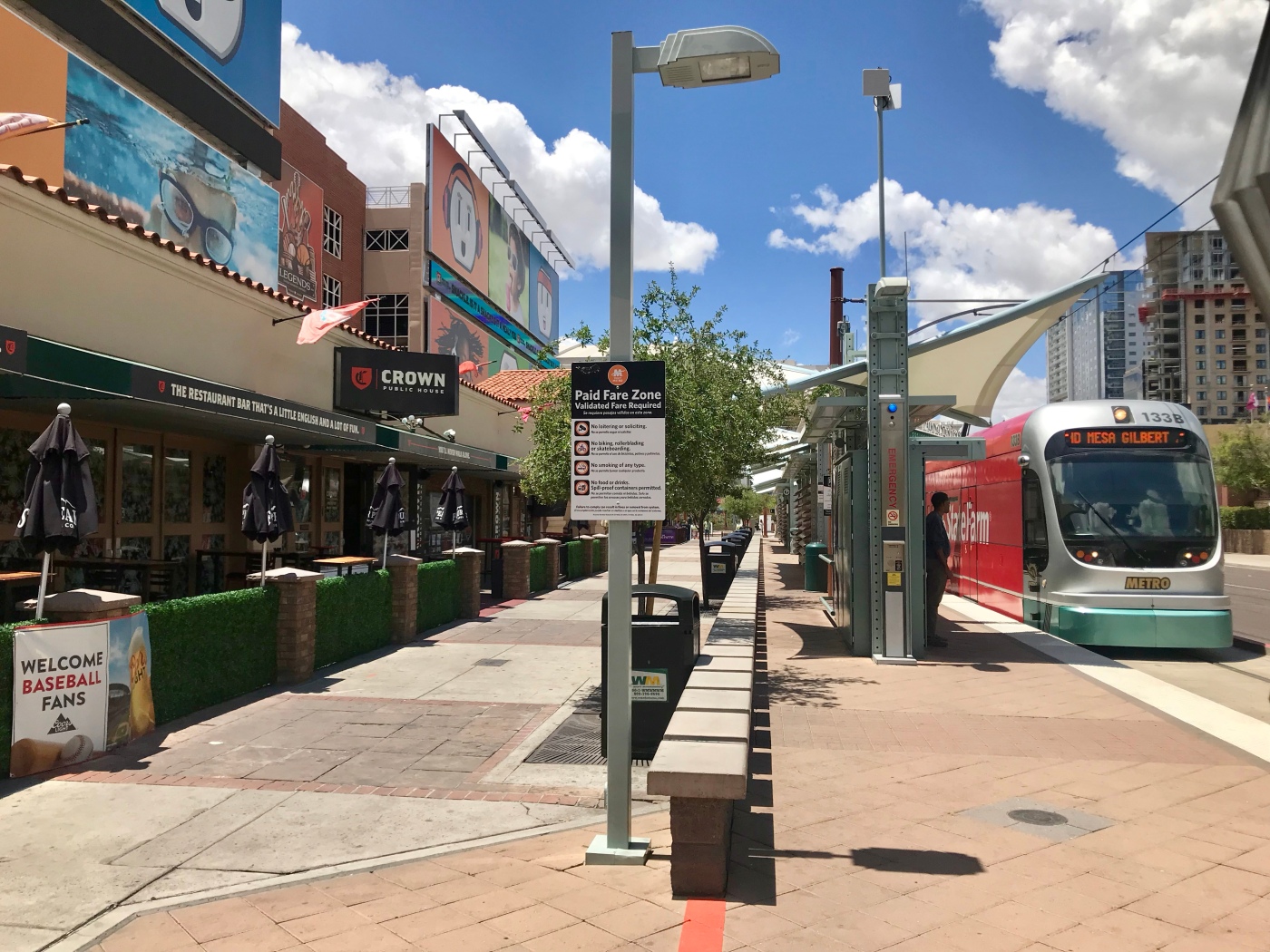 In the corporate world, mergers are often greeted with skepticism. While shareholders may see increased value, employees fear layoffs and customers may experience market concentration. While it’s common for airlines, banks, and consumer product companies to merge, it’s far more rare to hear about a union of two restaurants. In downtown Phoenix, the marriage of an English pub known as a gathering place for Liverpool soccer fans and an all-American sports bar frequented by Diamondbacks and Suns supporters has resulted in the Crown Public House.

If the pairing seems unlikely, it’s best understood in terms of the circumstances that led to the wedding. The pub half had a decade-long history as the Rose and Crown at nearby Heritage Square. When the city, acting as landlord, decided it wanted something different on its property, the pub found a new home by joining forces with the sports bar formerly known as Coach’s Corner, situated in the ground floor of a parking garage just behind the eastbound Third Street / Jefferson light rail station. The westbound platform on Washington Street is a block away.

The entrance faces Jefferson near the corner of Fourth Street. Bike racks are found at the other end of the block near Third Street. A long patio generally used only during major events faces the light rail platform. Otherwise, most seating is inside, either at the bar or tables throughout. While the old Rose and Crown was divided into multiple small chambers, as would be expected at a British pub, the Crown Public House is one big dining room. Dark wood and posters of English idols like James Bond and the Clash retain some of the feel of the pub’s old quarters.

Just as there has been a reworking of an expansive sports bar to make the space feel at least somewhat like a traditional pub, the tap handles at the bar reflect a meeting of traditions from two different worlds. Expect to see Boddington’s and some other British brews alongside ubiquitous sports bar brews like Bud Light. Due to limited capacity, there aren’t quite as many traditional options as the old location. Some of the tap space that remains is devoted to local favorites or occasional guest appearances from craft breweries around the country.

The availability of Guinness is a sure reminder of the British Isles; however, without a full spectrum of English and Irish beers on draft, some improvisation is required to fashion a black-and-tan. When requested recently, the traditional English pub drink was created with Four Peaks Eight Street Ale acting as the pale layer of “tan” in contrast to the dark stratum of Guinness playing the role of “black.” The exact components chosen might vary at any time depending on the bartender on duty and the beers offered that day on the rotating taps.

The food at Crown also reflects the mixed marriage behind the establishment’s new identity. Pub grub now coexists with sports bar additions like pizzas. Understandably, there’s a lot of emphasis on areas of overlap between pub and sports bar fare, mainly burgers and sandwiches. Handheld foods like grilled cheese or the Turkey Diablo sandwich, accentuated with a little heat from green chili, all come with fries, slaw, or potato salad as sides, with the option to upgrade to side salad or cup of soup for a small additional charge.

The soups carry on the pub tradition with a hearty Guinness stew, a thick New England clam chowder, and a leak-and-ale soup available by the bowl or cup. The last choice is reminiscent of a French onion soup with a layer of melted cheese on top. The Harvest Salad is also a holdover from the old pub menu, thankfully now offered with wider variety of dressings than the excessively sweet raspberry vinaigrette it used to be paired with. Some new additions well outside the pub tradition include a Baja Power Bowl with black beans, rice, and chicken.

Despite the appearance of previously unheard of items like pizza, poke, and that power bowl, most of the menu is still rooted in hearty pub fare, and it’s in that aspect that the kitchen finds its greatest strength. Fish and chips are a favorite, with a chunky house-made tartar sauce enlivening two generous slabs of cod. The shepherd’s pie features braised beef topped mashed potatoes and gravy. The meatloaf, also served with mashed potatoes, is nicely accentuated with a balsamic drizzle that plays well with a layer of melted Gruyere cheese atop each slice.

Jambalaya pasta, a creation reflecting the sports bar side of this merged menu, has a lively tomato flavor, more like a puttanesca than a creole, but still a good match for the shrimp, diced chicken, and slices of andouille sausage tossed with fettuccine noodles. The food is generally hearty enough to be filling on its own, but just in case, there are a few desserts on the menu. Bread pudding with whiskey cream sauce, a hot fudge brownie with Reese’s crumbles, and a boozy ice cream float for customers 21 and over are among the options to end the meal.

In addition to beer, an obvious emphasis in anything resembling a pub, there’s also some wine and a full bar, including a brunch set-up allowing customers to accessorize their own Bloody Marys. Call it a mixed marriage, a shotgun wedding, or something else entirely, but the union of a British soccer pub and an American sports bar is now part of the landscape near the convention center, ballpark, and basketball arena.  With new residences opening nearby, there may also be some neighborhood shareholders to realize value from this uncommon merger.