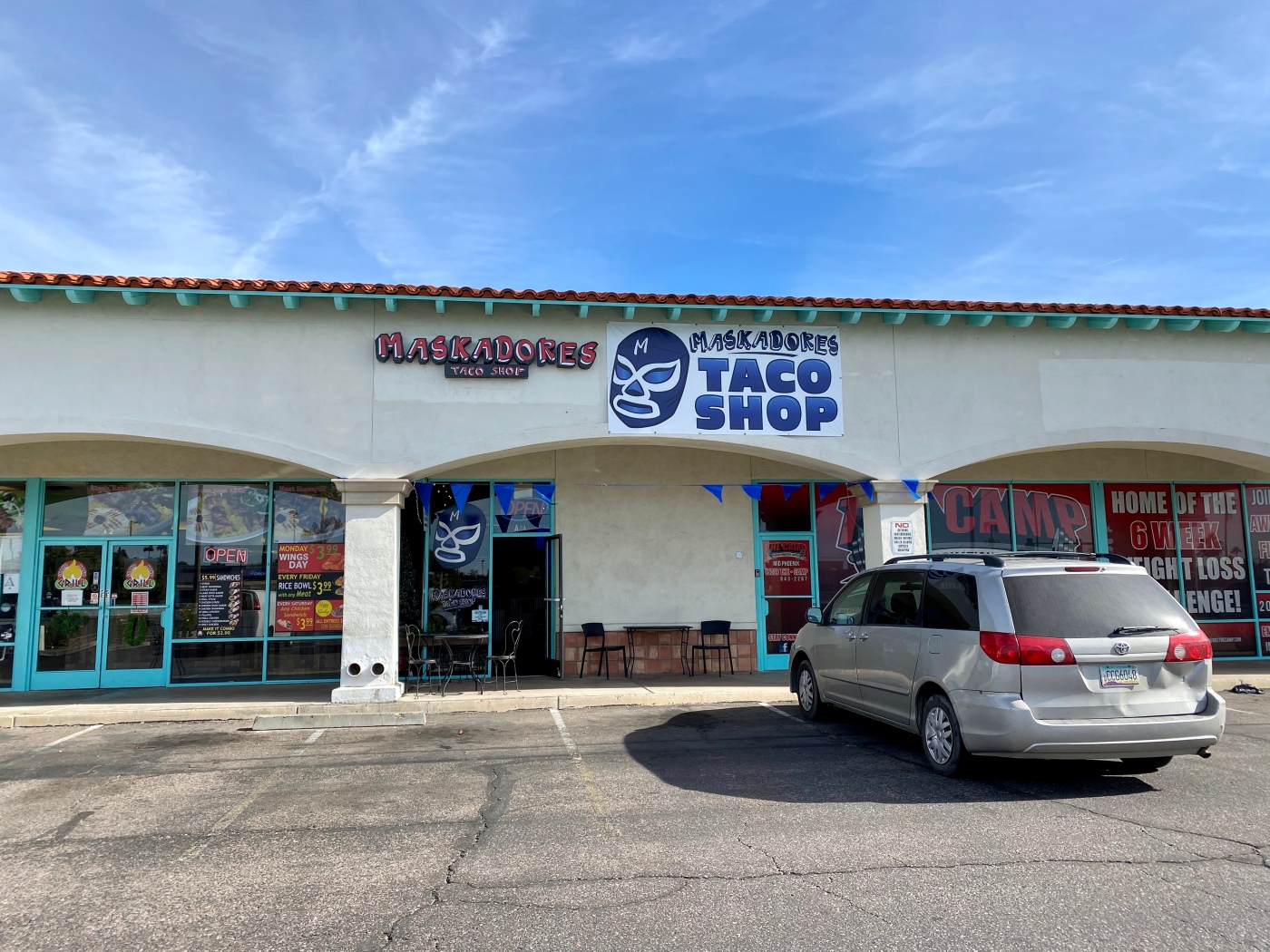 In the spring of 2020, masks have migrated from a Halloween novelty to an everyday accessory. Public health guidance has shifted to a recommendation that most people cover their mouths and noses in crowded public spaces, but that has not ended the debate. People have been told to leave places for wearing masks and for not wearing them, and masks have come to be seen as yet another aspect of a partisan divide. At Maskadores Taco Shop on 19th Avenue, masks of another type are far less controversial, having always been a part of the theme and decor.

As its name implies, Maskadores celebrates the culture of La Luche Libre, Mexican professional wrestling known for the colorful masks worn by its competitors. Look for a banner with a masked luchador suspended over a storefront diagonally across the street from the 19th Avenue / Northern light rail station. The restaurant is one of many tenants in a shopping center anchored by an Albertson’s grocery. Bike racks are outside a 1942 historic building that was once home to the Good Shepherd Home for Girls and is now the headquarters of the 19North organization.

The small taqueria is found south of both the supermarket and the community center. Inside the small dining room, big masks are hung on the walls, looking down upon customers seated at the rugged wooden tables. Two small tables outside offer an appealing option for customers who are tentative in re-entering the world of on-site dining, and since almost everything is packaged to go, the restaurant works equally well for those who still prefer to eat at home. Orders are taken at a counter in back and food is prepared in a small open kitchen immediately behind.

The menu is placed over the counter. A column on the left specifies about a dozen basic meat fillings. The basics such as carne asada, tinga, and carnitas are generally offered in both typical and spicy/tangy variations such as asada ranchero or vinagretta chicken. All are worth exploring, but two standouts are the barbacoa and the tinga chipotle chicken, both distinguished by their tender textures and nuanced flavors. A selection of premium fillings at the bottom adds choices such as shrimp, fish, and alambre, a preparation of grilled beef with bacon and peppers.

An array of panels showcases various combos that can be built with the proteins. Flour tortilla tacos are a larger format with two included in a meal with rice and beans, either whole pintos or black. Street tacos are made with smaller corn tortilla and come four to an order. Tacos can be dressed in two stages. First, the cook behind the counter can add toppings such as cheese, cilantro, or pickled onions. Second, the customer has access to a salsa bar. The condiments there are unlabeled, but the creamy green salsa is actually the hottest with its serrano chilies.

All the same fillings that can fill open tortillas as tacos can also be wrapped in a larger flour disc to create a burrito. Breakfast burritos incorporating fillings such as machaca, eggs, chorizo, and potatoes are also an option. At any time of the day, the burritos can then be eaten by hand in their simplest format, but they can also be upgraded to a wet variant, dressed with sauce, that requires a knife and fork. They can also be deep-fried and topped with sauce to create a chimichanga with a choice of filling. Tortilla avoiders can of course obtain a burrito bowl.

The ultimate creation at Maskadores is the shop’s bandera burrito. This meal is topped with both red and green sauces, a sprinkling of cheese, a dollop of guacamole, a little pico de gallo, and a central band of sour cream. All these ingredients are arranged in a vibrant tricolor pattern that evokes the Mexican flag. Another cylindrical structure, the taquitos combo, is like the bandera burrito in terms of being a moist and messy (in a good way) with layers of beans, minced cilantro, pico de gallo, and shredded cheese tiered and tossed on top of the rolled tacos.

Additional options on the menu include familiar favorites such as enchiladas and quesadillas. The latter also comes in a smaller size known as “tacodillas,” mini-quesadillas that can be eaten with one hand and mixed-and-matched with one filling in one and a different filling in another. While much of the menu has a border feel, a menu item from more central and southern portions of Mexico is the sopes. These thick, concave discs of masa are fried and then served fresh and warm with a choice of meat, beans, cheese, and various garnishes on top of them.

Although Maskadores is a loosely organized chain in which some locations serve alcohol, this particular taco shop, sometimes designated Maskadores #10, does not have a liquor license. Beverages are therefore limited to a soda fountain and refrigerated case opposite the counter. The cooler also contains the restaurant’s one dessert: cheesecake in strawberry or mango flavors. Both are creamy, supple, and full of fresh fruit flavor. They are not only sweet indulgences, but also effective fire extinguishers for the lingering burn of the fiery salsas.

For most people who now wear them in dense environments, masks are meant to be a temporary means of coping with a public health problem. For Mexican wrestlers, they’re part of an enduring culture. A few luchadors have even found an entrepreneurial way to connect the two phenomena by crafting and selling face coverings inspired by La Lucha Libre. There may continue to be uncertainty and disagreement about wearing masks in public venues other than the wrestling ring, but just about everyone can appreciate tacos with a masked wrestling theme.