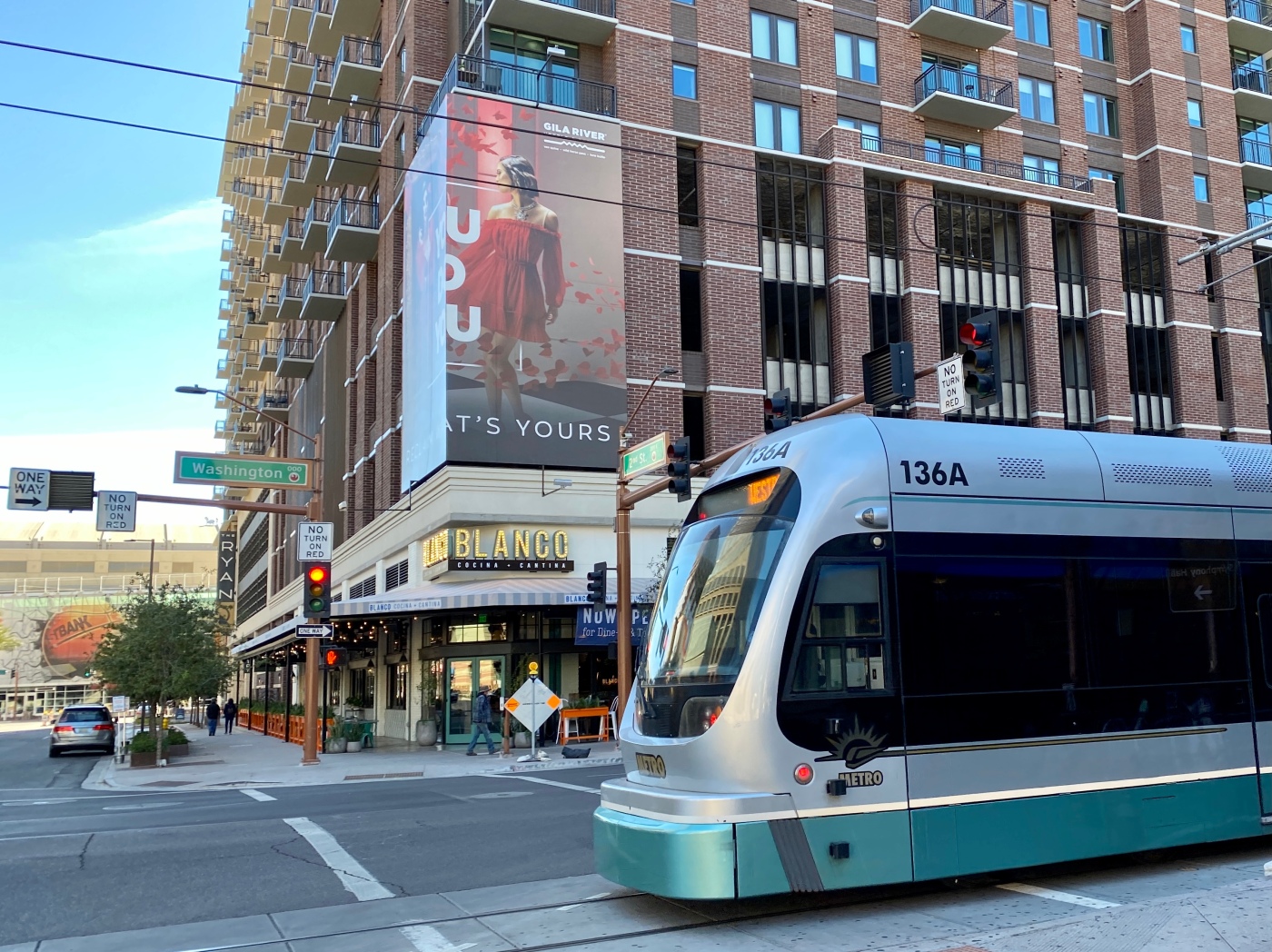 When downtown Phoenix has seen developments with ambitious names like “CityScape” and “The Arizona Center,” it’s hard to get excited about something with the more modest moniker of “Block 23.” All it takes is a little awareness of local history, though, to understand the importance of the redevelopment of this site, named for the numbered system of parcels used when the city was first developed. Block 23 has been home to city hall, a fire station, the Fox Theater, and a JCPenney store before sitting vacant, underutilized as surface parking, for several decades.

Now, Block 23 has come back to life in the latest RED development project, featuring a Fry’s grocery store, an apartment building, and Fox Restaurant Concepts’ second foray into downtown Phoenix, this time via its Blanco brand. While existing sites for this small chain in places like Scottsdale operate under the Blanco Tacos + Tequila name, the new downtown Phoenix location identifies as Blanco Cocina + Cantina, a tweak seen at several of the brand’s newer restaurants. The differences are subtle, with only minor variations in menus involved.

This particular Blanco is located at the intersection of Second and Washington streets, diagonally across the street from the Third Street / Washington westbound light rail station and a block from its eastbound counterpart at Third Street / Jefferson. The new downtown transfer hub is under construction just two blocks to the west. The restaurant embraces the street with a corner entrance, an indoor/outdoor bar, and patios on both Second and Washington. Bike racks can be found across the street or around the corner just outside the Fry’s grocery entrance.

Blanco’s interior is lively with abundant natural light and whimsical wall decor featuring some local luminaries. The restaurant has been building a steady clientele, partly through aggressive discounting during its first few months, but doesn’t feel crowded. It helps that Blanco’s space is generous and that staff are assiduous about safety practices necessitated by the current pandemic. As large events return to Downtown, there will be ample room for big groups of sports fans and convention attendees, but for now, the experience is open, airy, and uncluttered.

The restaurant’s starting lineup includes, as expected, fresh, chunky guacamole with anaheim and poblano chilies and a dusting of cotija cheese on top. The chicken tortilla soup reads almost like a Southwestern French onion with a layer of melted queso blanco hovering above a robust broth full of copious strands of tinga. All tables receive a complementary bowl of fresh chips with an accompanying red salsa. Like most of the food here, the salsa is flavorful but mild. A light touch with spice might even seem an affirmation of the “blanco” in the restaurant’s name.

That “blanco” approach to flavors that might be too intense for the uninitiated is also clear with BBQ pork tacos, noted as winners of a taco festival award several years ago. The meat in these is incredibly tender, and the flavor, while pleasing, has a sweetness more reminiscent of slow cooker pulled pork than Mexican barbacoa. For those who want a bolder taste, the traditional carnitas tacos are a better option. The meat has a crisp bark but retains its tenderness while the flavor is enlivened by the combination of orange, salsa verde, onion, and cilantro garnishes.

Additional taco fillings include short rib machaca, red chile chicken, grilled avocado, mahi mahi, carne asada, and ground beef. The last choice is served, as expected, in hard shells. The rest are in soft corn tortillas. All tacos are served in plated meals of two large tacos, a choice of black or charro beans, and a side of rice. The rice at Blanco is its own style. It’s not plain grains, but it’s also not the familiar golden-tinged “Spanish rice” served in so many local Mexican restaurants. Instead, it might be seen as something halfway between risotto and a pilaf.

The various taco fillings can also find their way into enchiladas, burritos, and even deep-fried chimichangas. In some cases, ingredients that might not have quite the right texture for tacos work remarkably well in another context. Such is the case with the sweet potato enchiladas, a hearty vegetarian choice, and the pork chile verde burrito, filled with a traditional stew. The fajitas are festive platters with peppers, onions, and a cob of elote. The tiger shrimp version of the Tex-Mex favorite is somewhat surprisingly one of the spiciest options on the menu.

Blanco has two dessert features: a caramel flan that is a solid version of a traditional sweet and a Mexican chocolate tiramisu served in a deep dish in which each probe of the spoon seemingly unearths new layers of chocolate mousse or wafer. The drink selection leans heavily on margaritas with several variants listed. The Dodge’s Cadillac is the strongest of the bunch with a one-two punch of Don Julio and Grand Marnier and a mix of coarse salts on the rim. Smashed Watermelon adds a fruity essence and the Jalapeño & Pineapple brings a touch of heat.

While Fox Restaurant Concepts has been operating the Arrogant Butcher around the corner for years, that particular restaurant is one of a kind in its portfolio. The new Blanco is the first attempt to replicate a Fox chain in the heart of the city. Based on lunchtime traffic, even with many office workers still at home, it seems to be finding an audience. While more adventurous and authentic Mexican fare can be found along the South Central extension, Blanco’s consistency and efficiency makes it well-poised for the comeback of conventions and concerts.