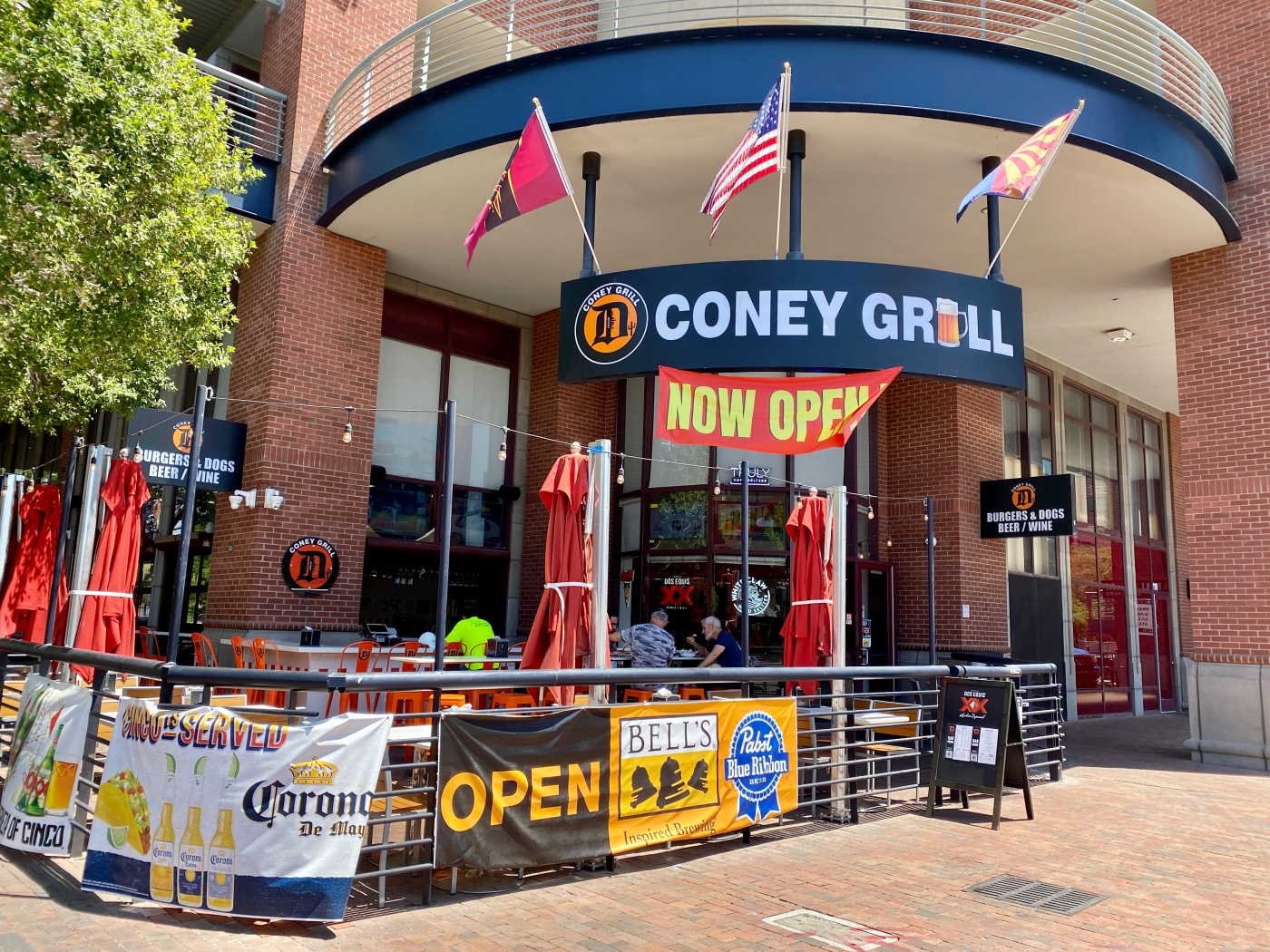 Midwestern migration to Arizona is a cliche, but like many stereotypes, it has a germ of truth at its foundation. There are many people in the Phoenix Metropolitan Area with origins in the Great Lakes states, including Michigan. As with transplants from all points of origins, many new arrivals from the Wolverine state bring their loyalties to Detroit sports franchises and a love of Michigan foods. Detroit Coney Grill, even though it makes reference to a New York landmark in its name, is designed for the displaced Michigander with both its regional food and thematic decor.

Before delving further into Detroit and Michigan food traditions, it’s important to understand why “Coney Island” is part of the restaurant’s brand. The Brooklyn neighborhood with its signature theme park is the place where natural casing beef hot dogs were popularized, and restaurants in the Detroit area that serve hot dogs frequently have “Coney” in their name. The style of preparation is not a New York tradition, however. Instead, it is a Michigan innovation of topping the dog with no-bean chili, chopped white onions, and a squirt of mustard on top of it all.

Two thousand miles away from the Motor City, Detroit Coney Grill has grown into a small local chain serving this type of hot dog, along with other foods from Michigan like loose burgers and Greek-influenced pita sandwiches, in multiple locations around the Phoenix metropolitan area. The two restaurant sites that are accessible via rail are a longstanding one in downtown Phoenix and a much newer addition to the family in downtown Tempe. While the core menu is the same at both locations, each restaurant is distinctive in its look, feel, and approach.

The Phoenix location on Adams Street, just a block from the stations at Washington/Central (westbound) and Jefferson/First Avenue (eastbound), is a lunch-only establishment with no weekend or evening hours. It’s a cramped space with the menu over the counter, tight seating, and a few tables on the Adams Street sidewalk. There’s limited space for decorations, but even with the tight surroundings, a Detroit theme is evident. Most interesting of all is a map of southeastern Michigan where customers can insert push pins to display where they come from.

On Mill Avenue in downtown Tempe, Detroit Coney Grill has chosen to dream bigger. The restaurant there is on the ground floor of the Brickyard building ,four blocks south of the Mill Ave / Third Street light rail station. The patio addresses the corner of Seventh Street and Mill Avenue with a  bar that faces one way onto the street and the other way into the restaurant’s interior. The floors are decorated with signs for Metro Detroit interstate highways, and big screens on the wall emphasize broadcasts of Michigan sports, both professional and collegiate.

Despite Detroit’s association with the automobile industry, ample bike racks are found right outside both restaurants. Another common element is an order-at-the-counter service model, although the Mill Avenue location does have full service for customers seated at the bar.. For those not from Michigan, some decoding of menu terms may be necessary before placing an order. A Detroit Coney is the specific type of hot dog described earlier. A loose burger is seasoned ground beef, not formed into a patty, but instead served inside a hot dog bun.

The Detroit Coney combo takes the chili-covered hot dog and then adds loose meat on top of that. It’s hard to tell where the chili ends and the additional layer of loose burger begins. It’s basically meat with meat, which is not uncommon at this restaurant. In fact, most of the burgers on the menu incorporate multiple patties. They’re small enough, though, that the combined serving size isn’t as overwhelming as one might expect when considering the three-patty green chile burger or the four-burger Big Mack “Inaw,” a nod to the northern Michigan destination.

If that still sounds like too much meat, both locations offer a variety of salads, including one that reflects the role of Detroit’s Greek community in that city’s history. Additional Greek influences are found in the gyros and other pita sandwiches. From the other end of Lake Erie, Buffalo chicken is on the menu as a possible salad protein or a pita pocket filling. At the Tempe location, an array of bar foods includes more recent menu additions such as sloppy Joe sliders and  Buffalo cauliflower in addition to the usual chicken wings slathered in sauce.

The downtown Phoenix location does not have a dessert menu. In Tempe, there is some ice cream as well as packages of Sanders fudge and chocolate bumpy cakes, two more Michigan food traditions. At both locations, there’s an array of fountain drinks and iced tea, but the Michigan touch is in the bottles of Faygo in all of its flavors. On Mill Avenue, Detroit Coney Grill extends the beverage selection with a full bar. The tap handles have some Arizona craft beers, but the predominant emphasis is on Michigan breweries like Founders and Bell’s.

Just as many transplants from Michigan blend loyalty to their state of origin with enthusiasm for their new home in Arizona, Detroit Coney Grill also celebrates local culture with some ASU-themed decor, especially on Mill Avenue. It’s a sort of hybrid identity that seems designed to balance the traditions of two different cities despite the large distance between them. Whether it’s a quick weekday lunch on Adams Street in Phoenix or watching a game with beer and food on Mill Avenue in Tempe, the experience delivers a bit of Detroit in the desert.