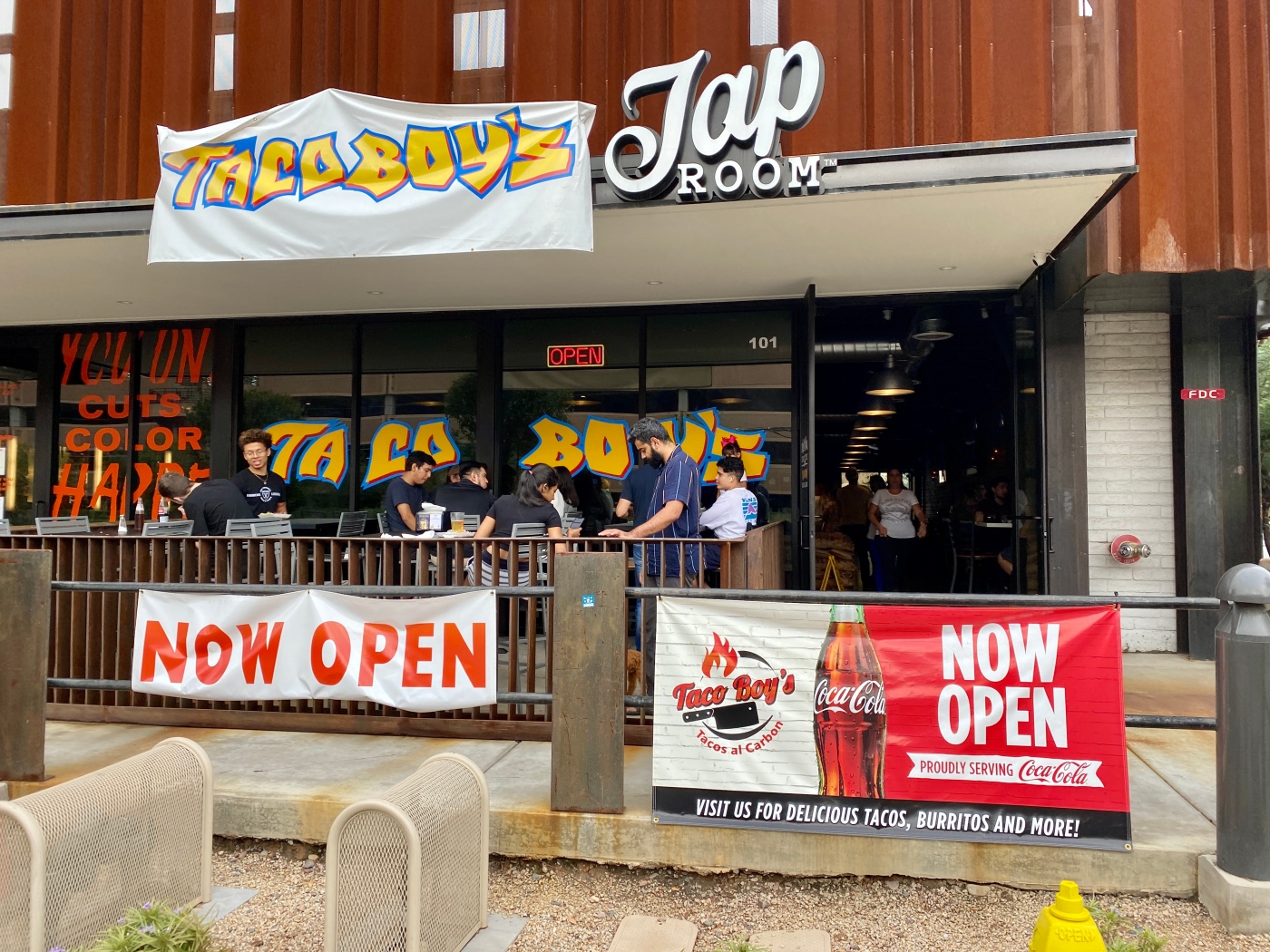 How far is the average diner willing to walk for a really good taco? It depends on a lot of factors, including ability, weather, and the character of the neighborhood. Half a mile is generally considered the upper limit of walking distance around a transit station, assuming a favorable environment. At the east end of Phoenix’s Roosevelt Row, Taco Boys has been offering carne asada and other Mexican specialties good enough to justify a half-mile trek from the Roosevelt/Central light rail station.

The original location of Taco Boys has a Roosevelt address, but its front door actually faces the noisy chaos of Seventh Street around the corner. Now, the restaurant has added a second location in Tempe, a quarter mile south of the University/Rural light rail station, providing an more accessible location for customers living and working on or around the Arizona State University campus. The format is nearly identical at both locations with a patio in front, crowded rows of tables inside, a bustling salsa bar, and a counter where orders are placed.

In Tempe, the restaurant is one of several in a strip building on the east side of Rural, near the mix of old apartment complexes sometimes known as “Sin City” and the modern towers that are replacing them. Images of Sparky and the Sun Devils add a bit of collegiate boosterism. Customers at the Phoenix location can look up and see a sculpture of a cow’s head looking back down from high above the counter. That imitation cabeza indicates an emphasis on  beef, and big bags of mesquite charcoal at ground level suggest how the meat is prepared.

The Boys offer six options for taco fillings, four of them cow-derived. The carne asada is the house specialty, and it makes its presence known not only by the enticing scent of mesquite grilling, but also by the nearly constant “chop, chop, chop” sound created as staff in the open kitchen attack grilled skirt steak with their cleavers. The result is a filling of minced, charred beef, seasoned only with a bit of salt and lime, placed on top of, alongside, or within tortillas and ready for accessorization at the salad/salsa bar at the front of the restaurant.

Among the other beef offerings, the barbacoa is equally delicious, albeit completely different. More tender and yielding than the carne asada, this feels more like braised meat. Its supple character makes it well-suited to blending with cheese in quesadilla. The cabeza, beef cheek, is even more tender with a fattiness verging on short rib. Tripa is of course completely different with its chewy textures. The two non-beef offerings are pollo asado and pork al pastor, both serviceable choices but unlikely to displace the beef selections as the menu favorites.

All those meats can be made into tacos, burritos, quesadillas, or vampiros (a variant of the tostada in which the tortilla is crisped to order on a griddle). With tacos or vampiros, three or four should satisfy most appetites. The burrito is a meal in itself, and the quesadillas fall somewhere in between with two small ones serving as a hearty meal and one large one sufficient for two people to share. A do-it-yourself option is the plato, a generous platter of meat with a serving of creamy refried beans and a multitude of tortillas to enjoy with it all.

Although Taco Boys is clearly a meat-centered operation, there is a “vegetarian option” listed on the menu. It’s a cheese quesadilla with roasted onions. There’s also the option to order a bean and cheese burrito. For those not wanting an entirely meatless meal but desirous of some vegetables to balance the protein on the plate, there’s an option to upgrade any entree to “fajita style.” For less than a dollar, any burrito, taco, quesadilla, vampiro, or plato can be enhanced with grilled bell peppers and onions, adding plenty of flavor, color, and nutrients in the process.

Of course, there’s even more botanical bounty at the salad/salsa bar. This well-stocked centerpiece of the dining room features three salsas: a mild, creamy avocado condiment; a green salsa of medium intensity; and a fiery red beast for the highest level of spice. Other choices include fat radishes, sliced cucumbers, pico de gallo, minced cilantro and onion, shredded cabbage, wedges of lime, and thick slabs of carrots. It’s a lot and to accommodate the ample payload, Taco Boys gives each customer an entire plate to fill at the bar after ordering.

With so much bounty at the salsa bar, it’s possible to view a trip there as an appetizer course. Just dip some of those radishes, carrots, or cucumbers in the avocado dip while waiting for tacos. For dessert, there’s cookie cake, a pastry made with Maria biscuits, condensed milk, and cream cheese. A tall, icy cup of house-made horchata, pina, or jamaica helps to extinguish the fire of the red salsa. Bottled beer can do the same. The Tempe location also has an array of self-service beer taps inherited from a previous tenant, allowing it to offer local and craft brews.

It should be noted that Taco Boys is a counter-service operation with a few twists. First, there can be a wait for food to be prepared at peak times. When that happens, the staff are up front about the time involved. Second, Taco Boys is one of the few counter-service restaurants where customers pay upon departure. Keep that in mind to avoid an inadvertent dine-and-dash situation. Both Roosevelt Row and the ASU Tempe area seem to have more taco options than ever, and Taco Boys is a good reason to walk a little farther to enjoy some of the best of them.