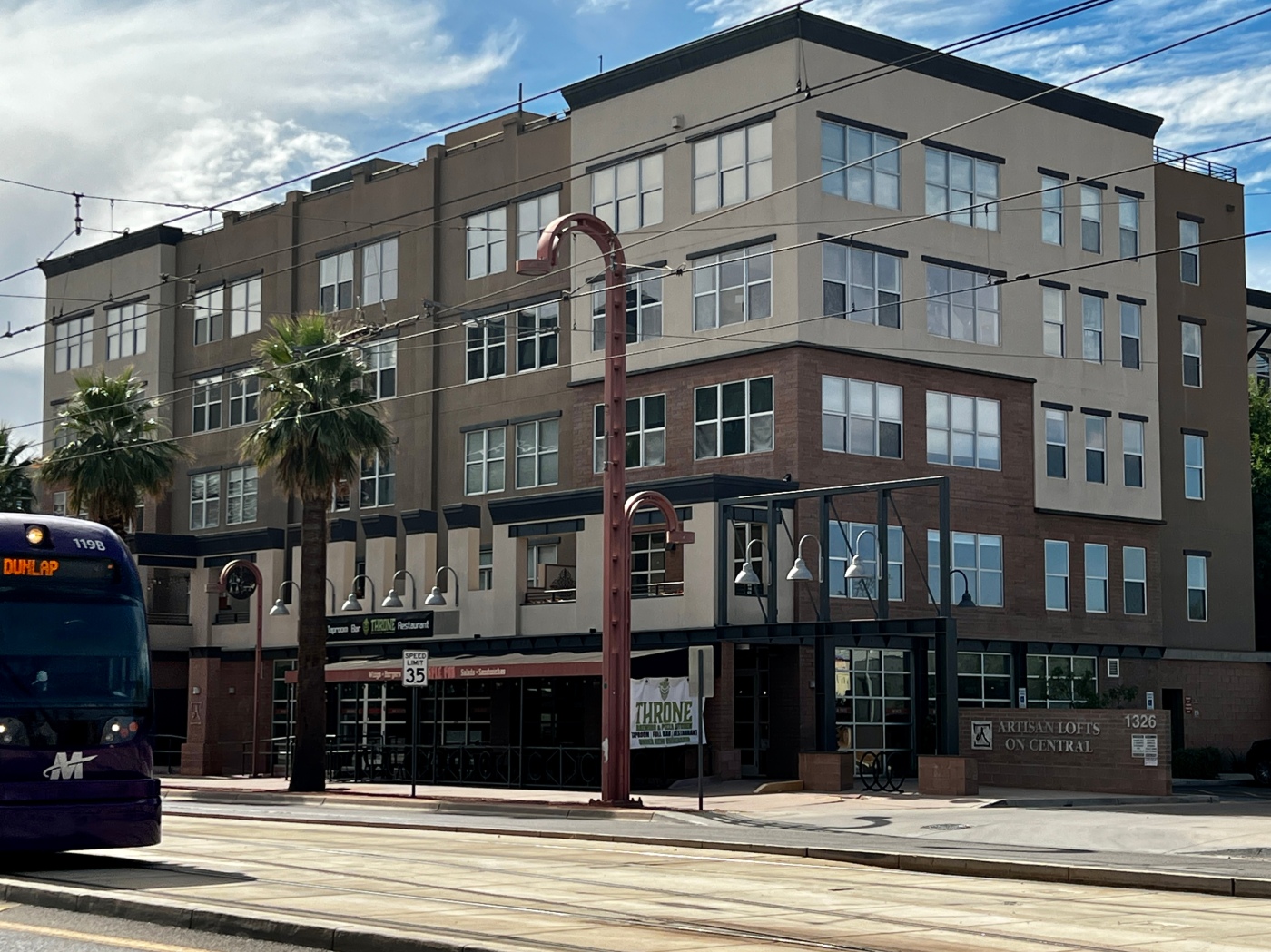 With the current brewery boom, craft beer producers have sprouted in nearly all corners of the  Phoenix Metro Area. After becoming established in their places of origin, a next step for many is to create a presence in or near downtown Phoenix with a taproom or pub. State 48 and Arizona Wilderness have both opened additional locations in the heart of Phoenix, and Pedal Haus will soon follow. Another beermaker, Throne Brewing, has expanded beyond its west side origins by acquiring the old Pizza People Pub, combining the existing food menu with its own beer.

The rebranded pub, now known as Throne Brewing & Pizza kitchen, occupies a space in the ground floor of the Artisan Lofts residential building, across from the McDowell/Central light rail station and the Burton Barr Central Library. A helical bike rack matching the building’s exterior decor is found right outside the restaurant’s front door. Inside, there are long, high communal tables near the front, a wraparound bar by the kitchen, and traditional tables and a few spacious booths toward the back. There’s also some outdoor seating on a patio facing Central Avenue.

Appetizers are a mix of pub and pizzeria influences. Spud fingers are essentially oven fries with a dill ranch dressing for dipping. A more indulgent variation is the Drewpy Fries, a poutine-like dish of the same potatoes covered in layers of cheese sauce, prosciutto, bacon, and scallions. Jalapeño canoes are an innovative starter in which hot peppers are hollowed, removing the spicy seeds in the process, and filled with cheese. Balls of garlic monkey bread and an appetizer of two large, tender meatballs in marinara sauce are more traditional pizzeria fare.

Unlike several pizzerias located nearby in Phoenix’s downtown core, Pizza People isn’t VPN-certified, and it doesn’t claim to be. That means stone tray ovens rather than wood-fired ones. The result is a more even crust with less char and not as much differentiation between the core and the cornichon, or edge, than one might encounter a mile to the south. It also means a broad array of toppings that combine in ways not envisioned in Neapolitan pizza tradition. As long as one doesn’t expect strict orthodoxy, it’s easy to enjoy Throne’s pies on their own terms.

Closest to traditional is the margherita with red sauce, basil, tomato, and mozzarella. Variations on that theme include the Sara, which adds spinach, garlic butter, red onion, and avocado, and the Fun Guy, which matches crimini mushrooms with truffle oil and fresh arugula. The Testosteroni is the meatiest of the bunch with pepperoni, ground beef, and sausage while the Calzone pizza features meatballs, prosciutto, and pepperoni with goat cheese. Spicy pizzas include the Manny with jalapeño cream cheese and the Hot & Fresh with Buffalo sauce.

Other pizzas at the pub push the limits of topping combinations with interesting and generally successful results. The Date Me pie isn’t about romance, but instead about the tiny fruit grown in arid regions, including Arizona. Minced dates provide a sweet note balanced by the saltiness of prosciutto and the creaminess of ricotta cheese. The hearty BBQ Pig N’ Chick blends bacon and chicken with barbecue, rather than tomato sauce, providing the base flavor. All pizzas can be customized for an extra charge with gluten-free crust or a vegan cheese alternative.

Speaking of cheese, Throne has an entire section of its menu devoted to mac-and-cheese. Everything starts with a base of elbow macaroni baked in a slightly sharp sauce of melted cheese with a charred, crisp layer on top. From there, ten different flavors add ingredients such as mushrooms, sun-dried tomatoes, or smoked paprika. With any of these, a protein component such as chicken or bacon can be incorporated for a few dollars more. Two serving sizes are available: an eight-ounce “mini” for one person and a 20-ounce “biggie” ideal for sharing.

Sandwiches follow a simple model of a thematic assortment of ingredients in a brioche bun with a choice of a hamburger, shredded chicken, or a black bean patty.  All of these come with a choice of agave apple coleslaw or side salad. The lightest entrees on the menu are the salads. The Willo Grove features a base of mixed greens topped with pecans, arugula, orange segments, dates, olives, and goat cheese creating a complex yet effective blend of sweet, salty, bittery, and sour tastes. All the salads are available in multiple sizes for sharing as desired.

For dessert, a half-baked chocolate cookie is an enduring menu favorite with molten dough in a semi-solid state mixing with melting vanilla ice cream above it. Other desserts offered include peach bread pudding and a flourless chocolate cake. In terms of beverages, Throne features a lineup of beers brewed at its facilities in Glendale and Peoria. Choices on tap at any time may include the crisp, light Anointed saison farmhouse ale or the intense, dark War Hammer imperial stout. One or two guest taps feature the output of other local breweries and cider producers.

While craft beer is the obvious focus here, there is a full bar with wine and cocktails adding to the beverage mix.  With the surrounding neighborhood becoming more densely populated, both a pub and a pizzeria are desirable urban amenities. At the same time, breweries that may have originally started and retained their production facilities in outlying locations are beginning to see the value of a central city presence. Throne may be the latest brewery to arrive downtown, in this case via the acquisition of an existing restaurant, but it is unlikely to be the last.