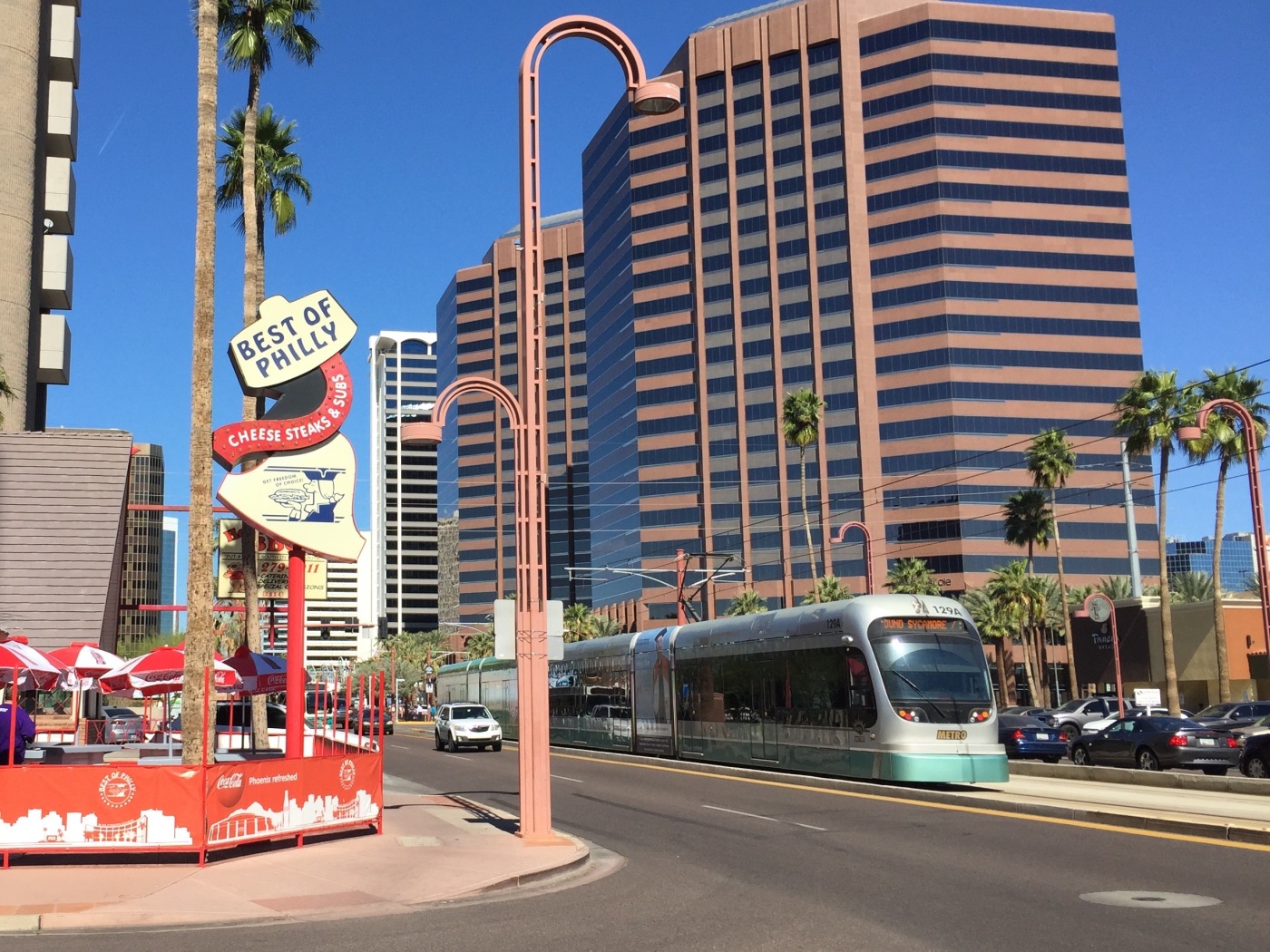 Which city is fifth largest in the United States? To those who care about such distinctions, it’s been a back-and-forth battle over the last decade between Phoenix and Philadelphia, with Phoenix having briefly claimed fifth only to be put back in sixth place a little later. Does it really matter? The birthplace of the nation and one of the country’s youngest major cities might not have that much in common, save a “ph” making an “f” sound at beginning of each, but there certainly areas in which the two cities can benefit from an exchange of goods, services, ideas, and, of course, food.

Philadelphia’s signature food is the cheesesteak, the simple sandwich of griddled ribeye, melted cheese, and maybe some peppers and onions. In the City of Brotherly Love, there are passionate debates about which places serves the best one. In Phoenix, most cheesesteak fans are just looking for a good one. Best of Philly, located just a block south of Thomas / Central station in the heart of Phoenix’s Midtown business district, specializes in cheesesteaks, along with deli sandwiches, gyros, and salads influenced by both Philadelphia culture and American Greek food.

Inside, the space is cramped. In fact, a sign urges customers to share the long red tables when necessary. Customers order at the counter, double back for a trip to the soda fountain, and then wait for their numbers to be called. There’s more room on the patio, which wraps around the building, facing both Central Avenue and much quieter Edgemont Avenue. There’s no bike rack per se, but the metal fence around the patio works just fine for securing personal transport.

The menu offers nine variants of the simple cheesesteak, ranging from a plain meat-and-cheese combination to specialities with ingredient combinations such as bacon and feta or avocado and sour cream. For the most part, though, it’s simply a matter of specifying a choice of cheese (American, Provolone, or the proverbial Cheese Wiz) and a choice of onions, mushrooms, or peppers. Want it all? That’s a “bomb steak.” There’s also the option of a pizza steak or a bbq steak, each of which covers the meat with sauce for a wetter, more flavorful sandwich.

The thinly sliced beef is lean and tender, and grilled chicken is an alternative meat choice. The bread is either a classic white roll or a darker, partially whole wheat one. All sandwiches are available in full or half sizes, and either dimension can be upgraded to a combo meal that includes a small serving of fries and a fountain drink. The fries are filling enough, but the onion rings are a stronger side. They may very well come from a freezer bag, but they emerge from the fryer crisp with the requisite distinction between the outer layer of batter and the inner layer of sliced onion.

Salads, which might be the antithesis of the cheesesteak, are offered — not as sides, but instead in large entree portions. No respectable cheesesteak place would serve arugula or tat soi; instead these salads are built on beds of familiar iceberg and romaine. A classic Greek salad adds crumbled feta, black olives, tomatoes, cucumber, and pepperoncini. For those seeking a gluten-free or low-carb version of a cheesesteak, the steak salad puts meat and cheese over greens instead of inside a roll. Likewise, there’s a grilled chicken salad available, as well as a chef’s salad with ham and turkey.

One would expect cold sandwiches at a Philadelphia-themed restaurant to be identified as “hoagies.” Instead, the menu lists them with the more generic term “subs.” Regardless of name, there are numerous choices of sandwiches made with ham, turkey, and salami, along with various cheeses and vegetables. The restaurant also cooks hamburgers, hot dogs, chicken wings, and chicken tenders. These choices are all serviceable, but none come close to eclipsing cheesesteaks as the primary lunch choice of the restaurant’s clientele.

There’s a slight Greek influence here, and that becomes most apparent in the gyros and grilled chicken pita sandwiches. This not a dedicated gyros shop or a full-fledged Greek restaurant, so don’t expect to see a big cone of meat rotating in the kitchen. The gyros meat is sliced in advance, although reasonably well seasoned. The accompanying tzatziki sauce is abundant with dill and thick with yogurt but light in terms of cucumber content. The pita is in the Greek style, meaning no pocket, just an airy disc that does a good job of absorbing juices from the sandwich.

There’s no dessert on the menu — not even Tastykakes, the regional favorites from a bakery at Philadelphia’s navy yard. That omission may not be too much of a loss, though. Most meals at Best of Philly leave little room for anything else, even in a separate “dessert chamber.” A bigger disappointment may be the restaurant’s limited hours of operation. While Philadelphia rivals Pat’s and Geno’s are both open 24/7, Best of Philly is content to serve lunch six days a week with no evening or Sunday hours.

With new residential construction, some of it potentially linked to restaurant development, occurring throughout MIdtown, perhaps those hours will eventually change. Then again, this is a family business and may already be profitable with daytime traffic from nearby offices. Central and Thomas may never be quite the nexus of cheesesteak activity that the triangular intersection of 9th Street, Passyunk, and Wharton is in South Philadelphia, but Best of Philly makes the heart of Midtown in the nation’s sixth, fifth, or however largest city just a bit more interesting.