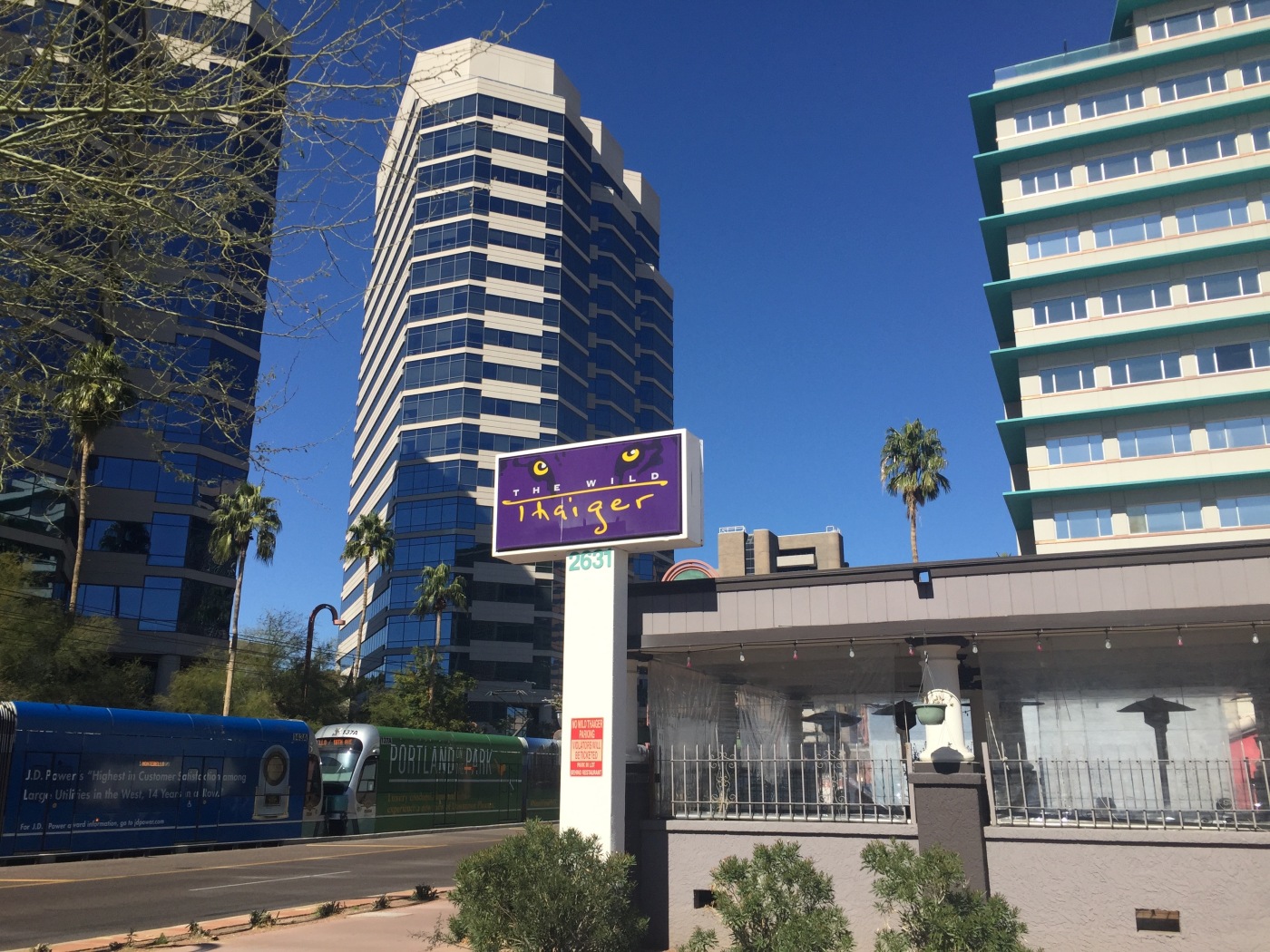 After years in the doldrums, Midtown seems to be enjoying a modest resurgence. In the linear business district along Central between McDowell and Indian School, employers such as Banner have occupied vacant space in office buildings, new residential construction is underway, and coworking spaces have set up shop. In fact, the name “Midtown,” long obscure to residents who thought of everything south of Camelback as “Downtown,” has acquired enough cachet to see its borders stretched, with restaurants as far east as 24th Street using “Midtown” in their names.

With new development and enthusiasm taking hold in Midtown, it’s important not to lose sight of businesses that have been around for years, opening and prospering even during the lean times. One of those is Wild Thaiger, a Thai restaurant located just two block south of the Thomas / Central light rail station in the heart of Midtown’s office corridor. Like so many Thai restaurants, Wild Thaiger has a name incorporating wordplay, but its menu stands out for its original approach based more on its own signature dishes than a modular matching of proteins and preparations.

In other words, instead of suggesting that any curry, stir-fry, or noodle dish can be prepared with any meat or tofu, Wild Thaiger gives customers a few choices but also emphasizes some dishes that showcase the kitchen’s expertise. The restaurant is a plain box of a building, but one strength is a large covered patio facing Central Avenue. Unfortunately, there’s no bike rack anywhere nearby, so locking up against a bench or a fence is necessary for those who ride to the restaurant.

Inside, there’s a host station and a small dining room with dark furnishings. A painting of a tiger, presumably a wild one, and a large aquarium are the dominant decorative elements. A few small pictures commemorate a much-celebrated visit by television personality Guy Fieri, whose favorite dishes are noted on the menu. An L-shaped bar surrounds the open kitchen, which becomes especially hectic during weekday lunch service. The atmosphere is simple, clean, and contemporary without a lot of tourist posters or other Thai restaurant cliches.

The menu begins with shareable appetizers such as crisp vegetable or chicken spring rolls, or fresh rolls with grilled chicken, shrimp, and fresh basil leaves within. Wild Thaiger’s take on satay goes beyond the usual three or four skewers of grilled chicken. Instead, the restaurant serves a satay sampler of chicken, beef, and shrimp drizzled with peanut sauce; a cucumber chutney is served on the side. Corn fritters are rough-hewn, full of roasted kernels and not too doughy or heavy. The accompanying sauce is quite sweet, but sliced jalapenos restore some balance.

The Dragon Eggz, which sounds like a band name from the ‘80s with a “z” instead on an “s,” are dumplings, shaped and served in a manner similar to shumai. The filling is a mix of ground pork, crab, and shrimp, but the pork flavor is by far the predominant one with shrimp in a supporting role. The crab is only a minor player. They’re available steamed, but fried is a better choice because of the contrast that is created between the crisp wrapper and the soft, meaty interior. There’s a tangy sauce on the side, and again sliced jalapenos add flavor and visual appeal.

Tropical fried rice, made that way with a bit of pineapple, is moist, mild dish for the beginner. For those who appreciate fried rice with stronger flavors, the Temple of Fire is seasoned with chilies, basil, and kaffir lime. Pad Thai, the popular noodle dish, is offered in shrimp, chicken, and vegetarian varieties, along with a low-carb version that uses shredded papaya and cabbage in lieu of noodles. In a nod to a dietary trend perhaps more popular now than even low carb eating, there’s even a gluten free pad Thai made with a special non-wheat soy sauce.

Those relatively familiar offerings repeat the frequent practice among Thai restaurants of letting the customer choose the protein. Much of the rest of menu leaves the decision up to the kitchen, pairing meats and vegetables with sauces that optimally match them. Curry chicken is described as “Thai comfort food,” and with its generous use of poultry and potatoes, that description seems apt. The style is rooted in yellow curry but a strong note of kaffir lime enlivens the dish and introduces an element of penang, another traditional style of Thai curry.

The “Phuket Fantsea” is a mix of shrimp and scallops with bean thread noodles. It’s not as spicy as expected, but satisfying with its generous quantity of seafood. The mu yang exhibits a traditional Thai harmony of flavors with skewers of salty grilled pork, tart papaya salad, sweet sticky rice, and restrained bitterness from fresh sprigs of cilantro. While the entire dinner menu is available all day, there are some items offered only at midday as lunch specials. Among them, kiewan is a moderately spicy green curry with beef, eggplant, and green beans.

Wild Thaiger serves a variety of desserts; some such as mango and sticky rice are traditionally Thai, and some, like a rich chocolate cake, are not necessarily Thai at all. The bar is small but manages to produce some creative cocktails in addition to offering beer and wine. The restaurant also serves about a dozen varieties of hot tea. By serving its own specialties and not always following the well-known pattern of so many local Thai restaurants, Wild Thaiger retains its own distinctive role in the changing neighborhood as Midtown slowly comes to life around it,