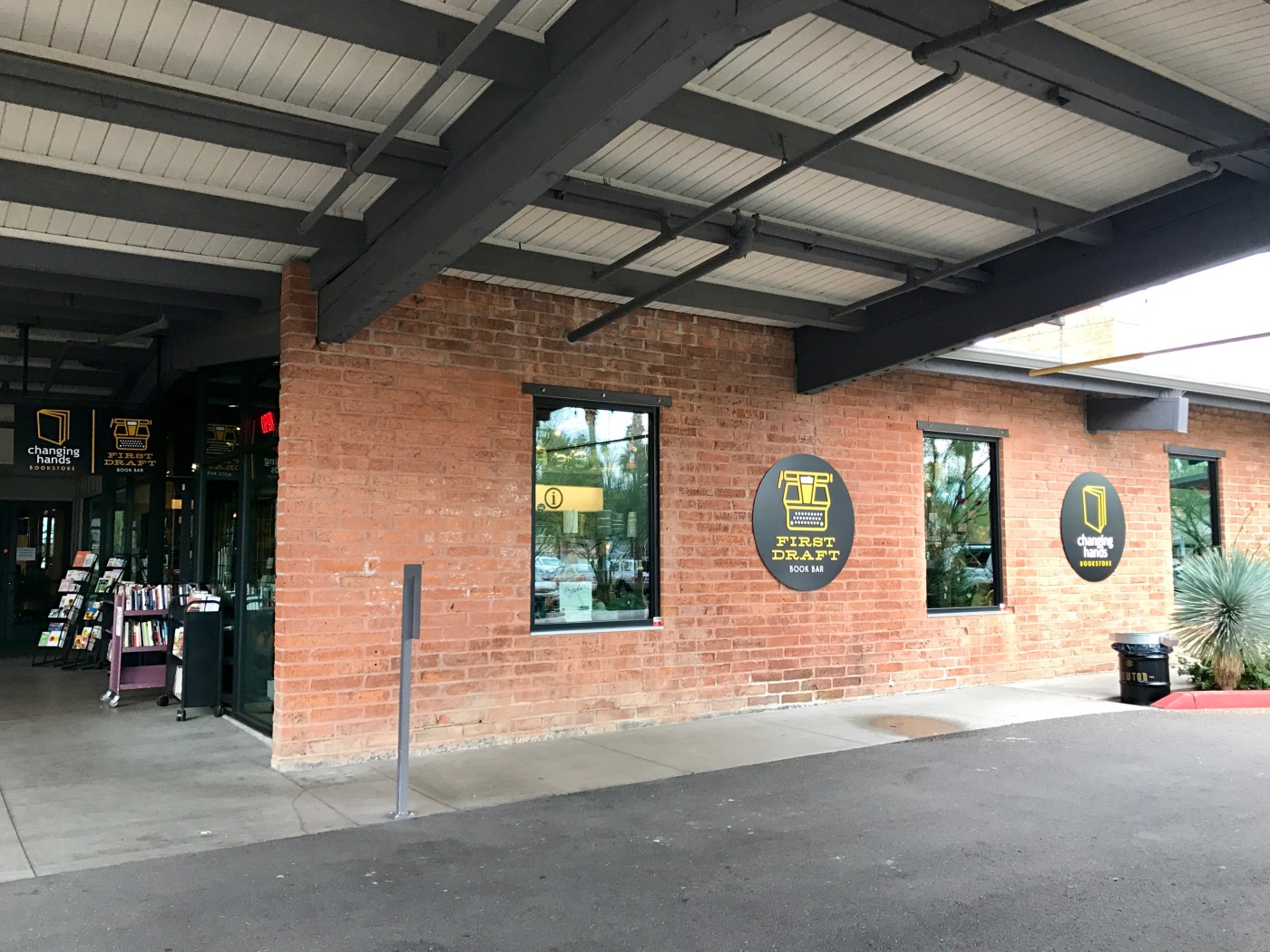 Over the past quarter century, independent bookstores have nearly vanished and then begun a gradual recovery. Phoenix used to have plenty of them: Houle, Dushoff, and Shakespeare Beethoven & Company are all names that live only in local readers’ memories. Those stores are long gone, but Tempe-based Changing Hands has not only survived competition from online stores and chains, but also opened a second location in Uptown Phoenix. The Phoenix store is smaller than the one in southern Tempe, but it has a distinguishing feature: First Draft Book Bar.

First Draft is Phoenix’s version of a type of venue that exists in many major cities: a place where books are sold, and food and beverages, including some with alcohol, are served under one roof. The setting is the Newton, an adaptive reuse project immediately west of the Central / Camelback light rail station. Within the Changing Hands store, First Draft is situated behind the information and checkout counters. Abundant bike racks are found outside the Newton’s main entryway, as well as along a sidewalk between the Changing Hands and the adjacent gardening store.

First Draft has twelve seats at an L-shaped bar and nine more at a separate counter. The former is the more social option; the latter has a bit more space and is ideal for those who wish to take up space with laptops and stacks of books. There is a second counter on the other side of the bar within a space known as “the Commons.” That room also has living room style seating with tables and chairs scattered throughout; however, the Commons is sometimes closed for special events, whether author talks and signings sponsored by the bookstore or rentals by outside parties.

First Draft identifies itself as a bar, but that word, like those found in the books on the shelves surrounding the counter, can have a variety of meanings. In this case, it doesn’t mean a full liquor license with cocktails, but instead beer, wine, coffee, tea, and snacks. Draft selections rotate, but some recent favorites offered on tap have included North Coast Scrimshaw Pilsner and San Tan Epicenter. Additional choices comes in cans and bottles, and the wine selection likewise focuses on lesser known vintners. A few hard ciders and sangria complete the adult beverage selection.

Drip coffee, cold brew, assorted teas, and the standard lineup of espresso drinks are foremost among the drinks without alcohol. One item not found many other places is a mazagran, a blend of cold brewed coffee and lemonade (unlike rum, which is found in some other versions of this drink). For sustenance beyond beverages, First Draft does not have a kitchen, but instead relies on pastries and a few light items from local purveyors. Savory bar snacks can be as simple as mixed nuts, marinated olives, or a flaky, slightly butter warm pretzel served with tangy mustard.

For a light meal, tuna salad with levain bread or a spinach and cheese pie provide options. Sweet choices include scones, cookies, muffins, and, best of all, a daily pie selection such as lemon blueberry. The wordplay involved in naming all the menu items at First Draft for literary themes can be a bit overdone, but the idea of a bookstore bar is one that has yet to grow old. Despite the juggernaut of Amazon and the rise and fall of Borders, Phoenix has managed to hold on onto at least one independent bookstore. Now, it even has its own bookstore bar to match.