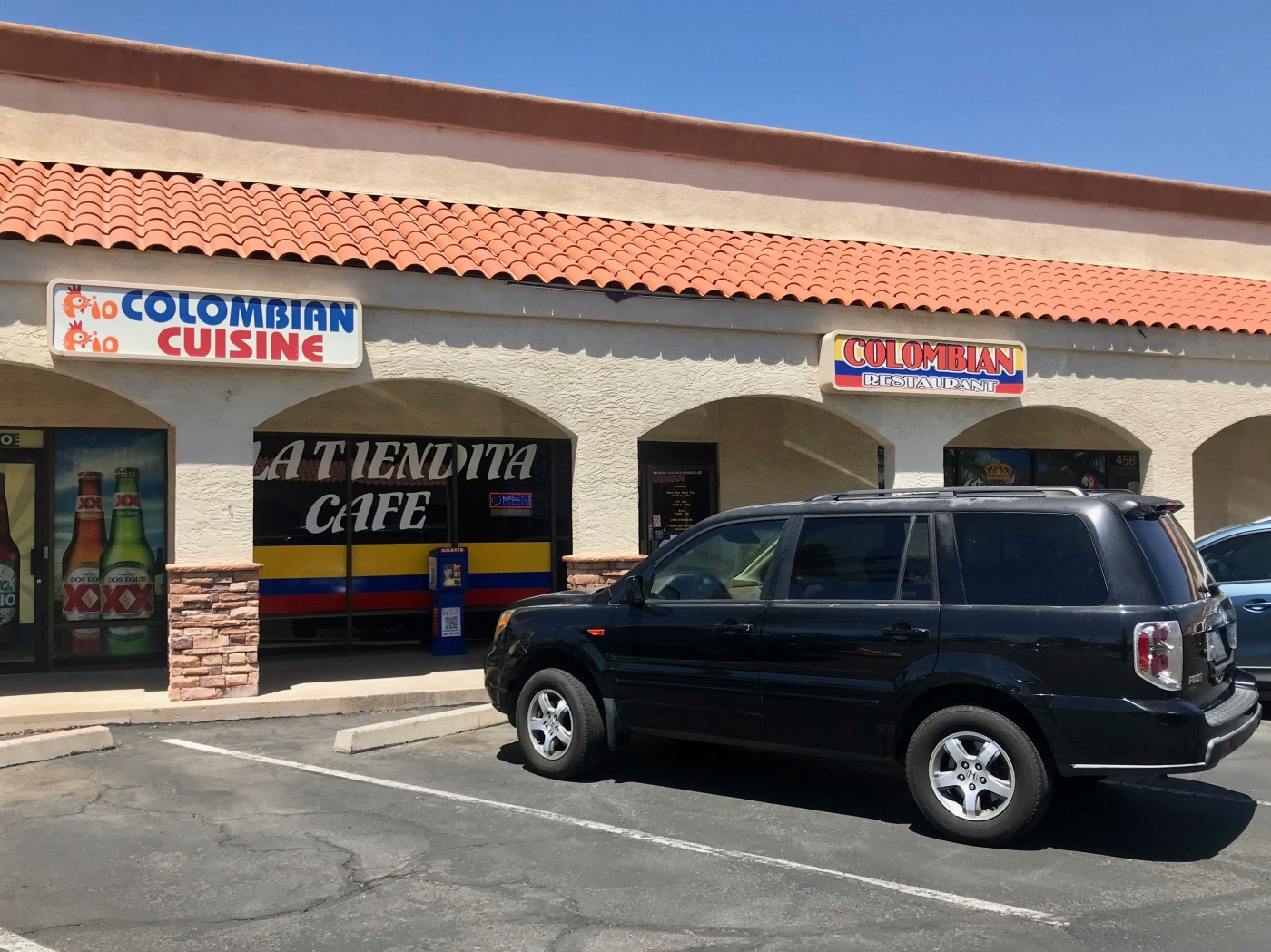 According to the Migration Policy Institute, there are about a million immigrants from Colombia, along with their children, currently residing in the United States. Most are found on the East Coast, especially in expected strongholds such as New York and Miami, but a few thousand have found their way to Arizona. That’s a relatively small number, but it’s enough to have cultivated at least one Colombian restaurant. La Tiendita, found in a west Mesa strip mall, may have the distinction of being the only outpost of Colombian cuisine in the metropolitan area.

La Tiendita, Spanish for “little shop,” is two blocks west of the Country Club / Main light rail station. It’s near Downtown Mesa but not quite a part of it since the landscape becomes decidedly more suburban on the west side of Country Club. Despite its placement in a bland stucco shopping center, the restaurant has a little color in its windows and even more inside, where the yellow, blue, and red of the Colombian flag prevail. On one side, there is an actual little shop, which sells ingredients and prepared foods found on La Tiendita’s menu.

The rest of the space is devoted to a comfortable, unpretentious dining room with a small bar and a television playing soccer, movies, or whatever else might be of interest. The decor is limited to some maps, flags, posters, and postcards, as well as Colombian dolls indicating men’s and women’s restrooms. The restaurant is full service, so a server will bring a menu to a customer’s chosen table. The menu is a laminated tour of Colombian cuisine with photos of some key items and bilingual descriptions of the food. A chalkboard calls out weekend specials.

Colombian food is a mixture of tropical tastes, mostly fruit and fish, from its coastal areas combined with the liberal use of hearty meats, potatoes, corn, and rice reflecting its more mountainous interior. Dairy also plays a significant role, especially in the form of cheese. Despite Colombia’s location along the Equator, most of the food is not heavily spiced, although a house salsa and bottled hot sauces are provided upon request. European, African, and Asian influences interact with indigenous ingredients and traditions, reflecting Colombia’s diversity.

If there’s a signature dish that Colombia is known for in the United States, it’s most likely arepas, the thick corn cakes that have existed for thousands of years in the territory now divided between Colombia and its neighbor Venezuela. La Tiendita offers arepas a la carte, and they can function as shared appetizers, light meals in themselves, or as a bread to accompany an entree. The arepa de la casa is stuffed with white cheese, while the arepa con carne is topped with shredded beef. Chorizo con arepa is simply a sausage link side-by-side with a corn cake.

La Tiendita also serves empanadas stuffed with chicken or beef. Unlike the puffy empanadas of Central America, the Colombian version is coated with a crisp, golden crust that produces a noticeably different texture than what would be found on the other side of the Panama Canal. For a grand tour of Colombian cuisine suitable for larger appetites, the bandeja paisa is an enormous entree platter with rice, beans, plantains, a fried egg, and a mini-arepa served with three different meats: ground beef, chorizo, and chicharron, or fried pork fat.

Most other entrees focus on one meat at a time. The bistec a la criolla involves a piece of beef pounded into a thin sheet and then topped with a sauce of tomatoes and onions. The Cartagena fish is a coastal creation involving a coconut milk sauce. Chicken comes in arroz con pollo, where it is blended with seasoned rice and vegetables, as well as in roasted form. Roast chicken is available in whole, half, or quarter sizes. A quarter chicken with rice makes a better entree for a child than the non-Colombian chicken tenders and fries listed as a kid’s entree.

On weekends, the standard menu is often augmented with specials that venture even farther into regional specialties. Often the focus in on soups that simmer for hours in the kitchen before being offered in the dining room sometime in the afternoon. Ajiaco is a bowl full of shredded chicken with potatoes and corn. Sancocho is an equally heart beef soup. Additional specials recently seen on the chalkboard have included desserts such as arroz con leche, a thick rice pudding topped with grated coconut and ornamented with cinnamon sticks.

Those desserts augment an already substantial menu of after-meal treats with familiar items such as flan and specialty sweets such as figs with arequipe, a Colombian variant of dulce de leche. For liquid sweets, La Tiendita offers an array of fruit juices, many from tropical species infrequently seen in the United States. Whether it’s called guanabana in Spanish or soupsop in English, the juice of this particular equatorial fruit is one of many available either on its own or blended with milk. There’s also a liquor license with bottled beer and some cocktails available.

While Mexican, Vietnamese, Chinese, and Korean restaurants have become abundant in west Mesa, there is also a trend towards even more culinary diversity along Main Street, Dobson Road, and Broadway. At this time, La Tiendita may be the only Colombian cuisine anywhere in Mesa, or perhaps in the entire Phoenix Metropolitan Area. Perhaps some day we’ll reach a level with Colombian food in which local restaurants focus on distinct regional specialties. Until then, La Tiendita is a little store with a menu big enough to capture the variety of Colombian food.

One thought on “La Tiendita”