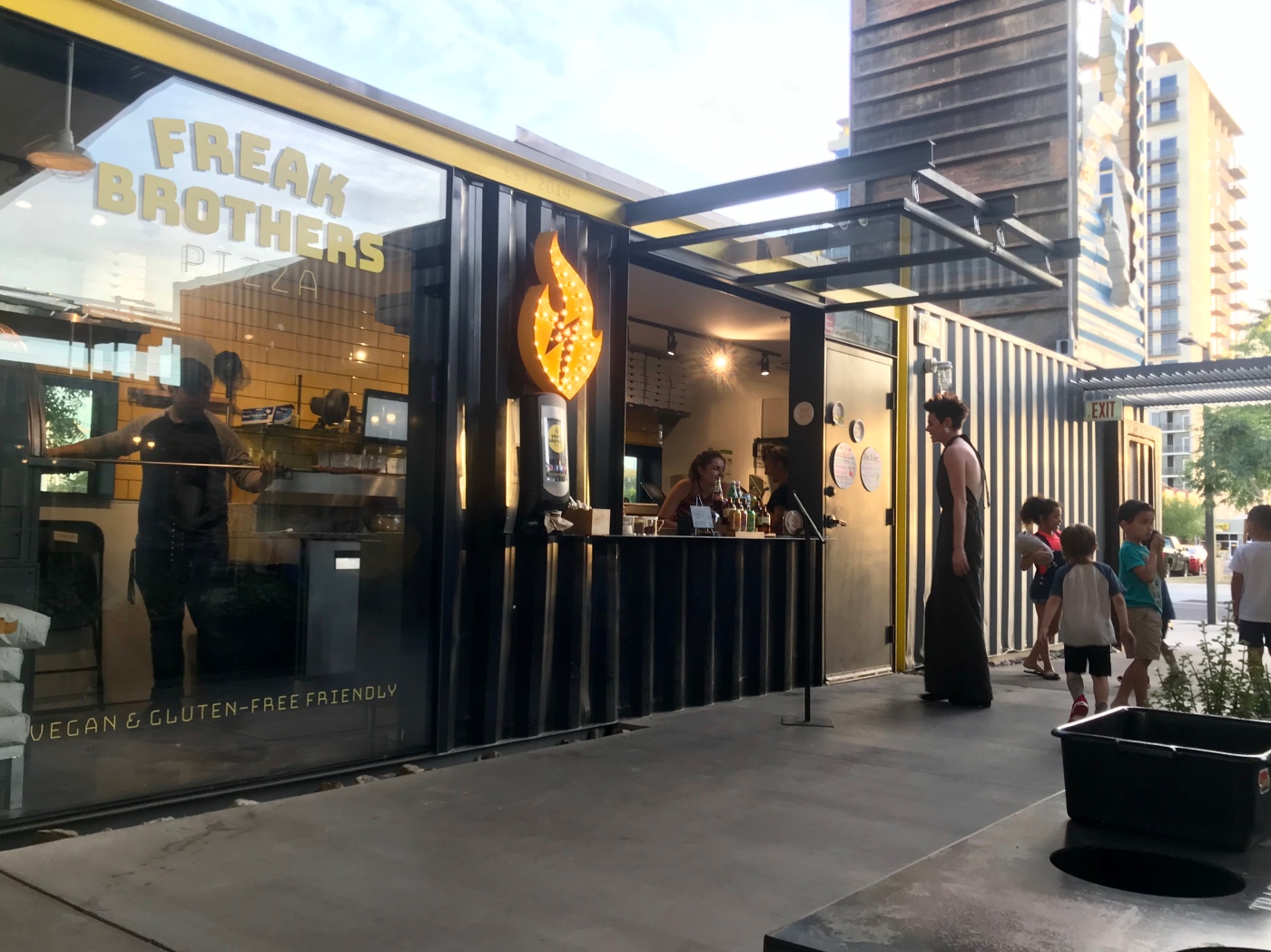 The path from food truck to fixed location is not always a clear one. Some establishments have made a successful transition to a permanent address that has served them well for many years. Others have had to retrench, change ownership, or even close entirely after a difficult transition from a mobile operation to a full-fledged restaurant. One food truck, Freak Brothers Pizza, has chosen to make the transition a gradual one by not opening its own standalone restaurant, but instead operating inside the Churchill, the shipping container project near Roosevelt Row.

Freak Brothers’ history has been several years of operation in locations all over the Phoenix Metro Area. The food truck is still out there. It can be seen on any given night at venues like Irene’s Tap Room. The Churchill, however, gives Freak Brothers fans a place where they can enjoy of one of the truck’s pies any day of the week for lunch or dinner. The specific site within the Churchill is at the southwest corner of the project, right off First Street and just two blocks from the Roosevelt / Central light rail station. Bike racks are found along both First and Garfield.

The converted shipping container that serves as the pizzeria’s stationary home isn’t all that much larger than a food truck, so it’s impressive that Freak Brothers manages to produce thoroughly satisfying pies with a thin but yielding crust. Of course, the small size necessitates a limited, focused menu with seven different pizzas, a few sides, and not much else. Remember, though, that the Churchill’s layout makes it easy to combine food from multiple tenants, so a Freak Brothers pizza can easily be paired with a salad or appetizer from another vendor.

The pizzas are 12 inches in diameter and served on cardboard discs. They’re enough food for one hungry person but can be readily shared by two people in combination with other items. As with all vendors at the Churchill, customers place their orders at the counter. Freak Brothers staff will then ask for a mobile number and send each diner a text message upon completion of their chosen pie. During the wait, usually no more than ten minutes, there’s ample time to browse the Churchill’s retail offerings or buy a drink or additional food.

The best test of a pizzeria is often a classic margherita, a simple combination of mozzarella, tomato, and basil that highlights the quality of the kitchen’s ingredients. The Freak Brothers version of this Neapolitan tradition succeeds with halved grape tomatoes, circles of fresh cheese, and abundant torn leaves. Even more basic red sauce pies include a classic cheese and simple pepperoni; however, Freak Brothers likes to showcase its container kitchen creativity with four distinctive pizzas of its own creation.

The Sriracha Chicken is exactly what is sounds like with bits of grilled poultry, sliced jalapenos, and a circular drizzle of the fiery red sauce for which the pie is named. The Spinach Heartichoke is a play on words reflecting the artichoke hearts on the pizza, and the Pesto Madness is a white pie with grape tomatoes, banana peppers and plenty of pesto. Freak Brothers’ most impressive creation is La MiaBella. Topped with almonds, kale, grape tomatoes, kalamata olives, and balsamic vinegar, it contrasts sweet and salty tastes, as well as both soft and crunchy textures.

The electric pizza oven inside the shipping container fires an eighth type of pie only on weekends, a brunch pizza topped with eggs and soy chorizo. There is some degree of customization available in terms of gluten-free crust and a vegan cheese substitute. In terms of sides or starters, Freak Brothers has two Mediterranean favorites: a creamy hummus with pita bread for dipping and a vibrant version of tabbouleh, the classic salad of bulghur wheat seasoned with tomato, parsley, lemon, and olive oil, available only on weekends.

Two desserts are offered from Sugarloaf Lane Bakery, a local purveyor of vegan pastry. The sea salt brownie and the chocolate chunk cookie are both thoroughly enjoyable takes on classic treats. Drinks offered by Freak Brothers are various sodas and sparkling waters in bottle and cans; however beer, wine, and cocktails are readily available elsewhere in the Churchill. It’s too early what the next iteration of Freak Brothers might be, but for now, the move into the Churchill seems like a good incremental step in allowing a food truck to find a little pizza permanence.