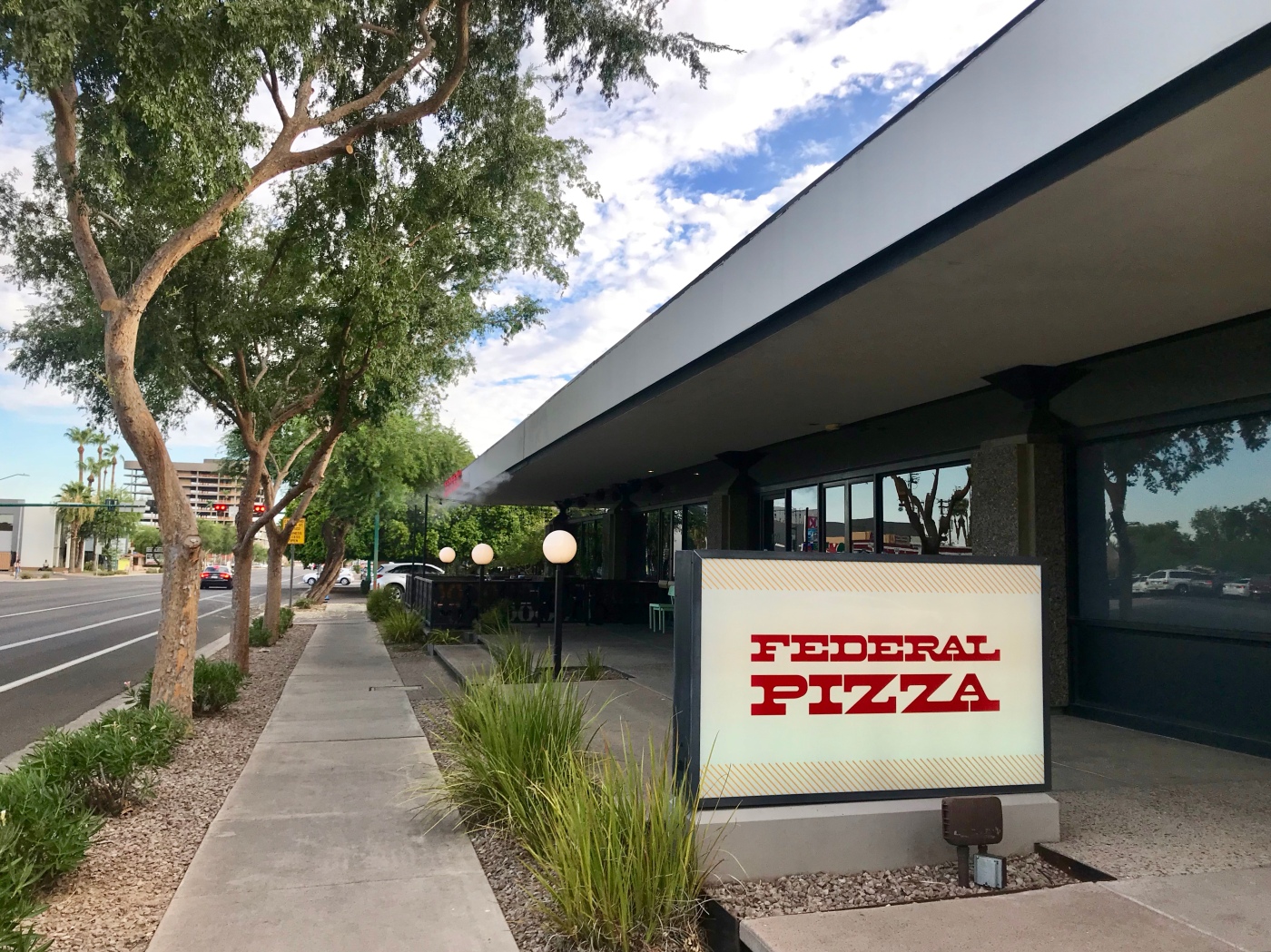 In September 2009, crowds gathered in Midtown to see the old Mountain Bell building, one of many designed by the late Phoenix architect Al Beadle, demolished after years of neglect. The lot cleared by the implosion is now home to new structures surrounded by copious surface parking, but many other Beadle buildings remain and are being preserved. Two miles north, a former First Federal Bank branch designed by Al Beadle serves as home to Federal Pizza, a venture by Upward Projects, the same folks behind the nearby Windsor, Postino, and Joyride Tacos.

Upward has just about cornered the market in Uptown and dominates the stretch of Central Avenue near Colter, just a quarter mile north of the Central/Camelback light rail station. In each case, a mid-century building has been updated and adapted for use as a restaurant. Federal Pizza’s entrance and bike racks are in the back, but a shaded patio faces Central Avenue and the buffered bike lanes there. One unique feature for Federal not found among its neighbor restaurants is a drive-thru, once used for bank transactions, and now available for pizza to go.

There’s often a wait for a table to eat on site. That’s unsurprising given the popularity of Upward’s other establishments, and the formula applied here is similar to the one seen throughout the neighborhood: a lively interior dining area, a relaxing patio, special menus for kids, and cuisine that straddles the boundary between the familiar and the slightly adventurous. As the name implies, the emphasis is on pizza, but the pies are only one of many options on a menu that blends Italian and American influences but generally avoids red sauce cliches.

Among the appetizers, the vegetable board is a lively platter of produce. A half bulb of fennel, a big segment of cauliflower, some stalks of rapini, a few whole carrots, and bunch of fingerling potatoes share the space with a romesco dipping sauce that is tasty but not really essential since the natural sweetness and earthy quality of each item is realized via roasting. Arancini, balls of fried risotto with crisp exteriors and molten cores, and polenta, formed from corn meal and shaped into sticks with romesco on the side, are both starchy starters meant for sharing.

Salads are sized for two to share, especially when paired with one of Federal’s pizzas. The most straightforward is, as expected a Caesar. Other salads such as the Federal Chop and the Chicken Panzanella add meat to the greenery, and a “great little salad” of mesclun lettuce and slivers of colorful beets is available as a side dish. Most interesting of all is the seasonal salad, which varies but has most recently featured kale, winter squash, portobello mushrooms, figs, red pear, pomegranate arils, and ricotta salata dressed in a simple balsamic vinaigrette.

The core of the menu at Federal is made up of a dozen signature pizzas, all with a slightly pillowy crust topped with thoughtfully chosen combinations of ingredients. Meatballs are sliced and paired with onions, mozzarella, basil, and tomato sauce in a simple but hearty pie. Other pizzas go a little farther afield with less common toppings. The Brussels sprouts pie combines tiny brassica with pancetta and lemon zest. Broccolini and corn team up for another vegetarian pizza, and the Big Star returns to meaty territory with Schreiner’s sausage as the main topping.

The pizzas, typically suitable for two to share, are all available in half sizes during the middle of the day as part of a “Double Down” lunch special. The other half of the special is any salad in a half size, so this lunch option is not only an appealing bargain, but also an effective way to sample two items for something close to the price of one. Sandwiches include an Italian grinder with cured meats, a meatball sub with generous spheres of ground meat and marinara sauce in toasted bread, and a meatless caprese with a simple trio of tomato, mozzarella, and basil.

With no carbs left behind, there’s pasta, too. Expect to see many of the pizza toppings repurposed artfully in the pasta bowls. Spaghetti and meatballs is a thoroughly satisfying take on a classic, while the lamb Bolognese adds a bolder taste to traditional meat sauce. The Mickey White is a creamy bowl of chicken, mushrooms, spinach, and strozzapreti
noodles. The garganelli are twisted, ridged tubes of pasta with vegetarian toppings of broccolini, pine nuts, and roasted tomatoes with a lively lemon pesto as a light sauce.

To drink, try one of the wine coolers, a beverage we haven’t heard much about since the bygone era when First Federal was actually a functioning bank. Flavors include grapefruit ginger and blood orange cardamom. There’s also plenty of straightforward wine and draft beer — not only in pints and shorties, but also in 64-ounce growlers and 32-ounce chubbs for take-home enjoyment. For dessert, the donuts with chocolate sauce can feed an entire table, and the cobbler features seasonal fruit bubbling under vanilla ice cream from Churn across the street.

There is already plenty of creative, well-made pizza around town, so it’s always tempting to ask why another pizza place is needed. Nevertheless, much of the wood-fired pizza action is found a few miles to the south in downtown Phoenix. Federal brings the pizza craft Uptown and combines it with the mid-century architecture that characterizes its neighborhood. Mountain Bell and its recognizable building in Midtown no longer exist, but the reuse of another Al Beadle building for an Uptown pizza experience shows that some things are worth preserving.