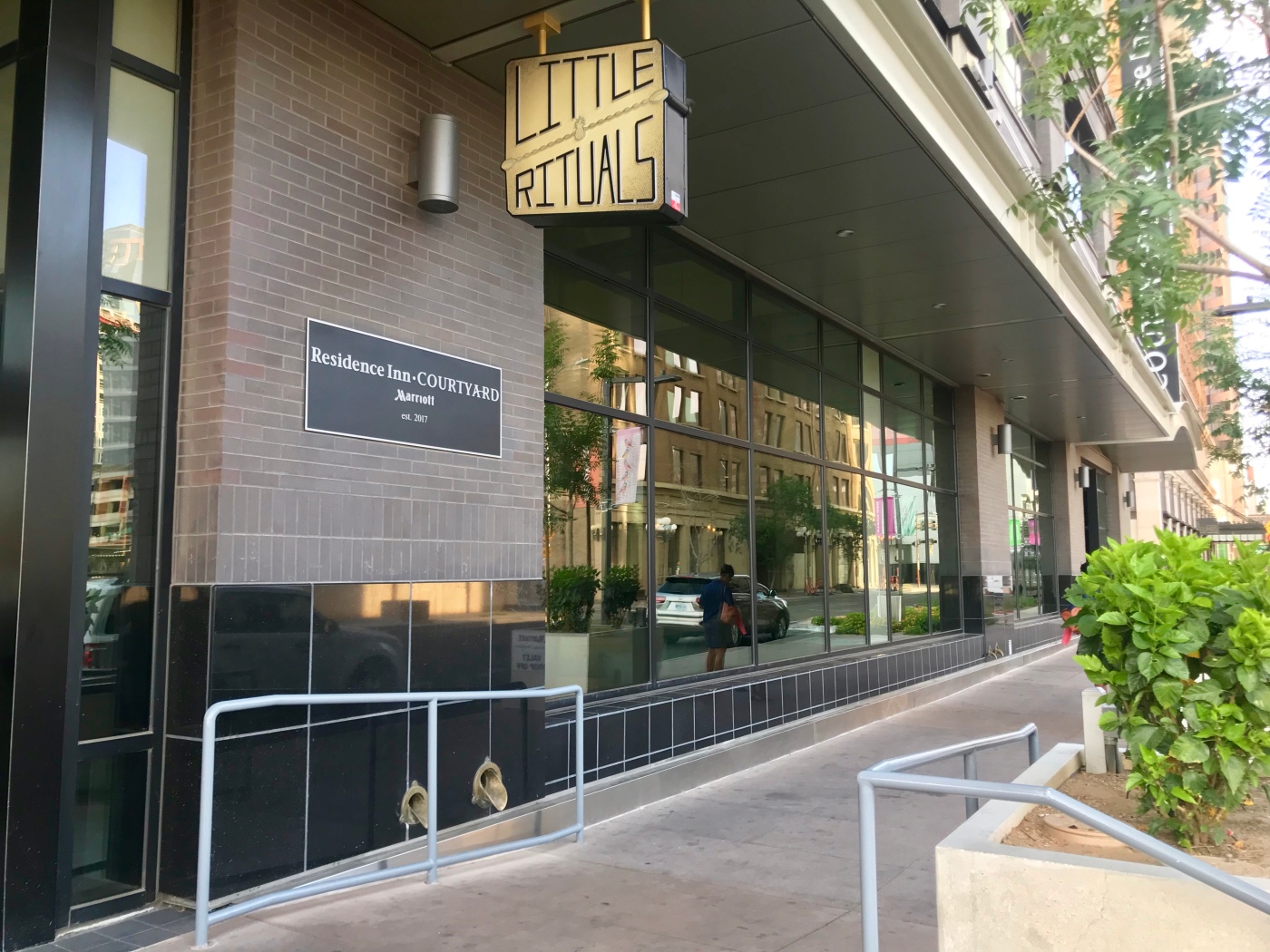 Even if a hotel doesn’t have a full-fledged restaurant, it almost always has a bar, if only in the form of a small space in the lobby or a hosted “manager’s reception” on an upper floor. In the heart of downtown Phoenix, a hotel building shared by two Marriott brands, Courtyard and Residence Inn, is home to two bars. The ground level bar with draft beer and Starbucks coffee is pretty typical of this sort of property. A short elevator ride, however, reveals Little Rituals, a second space for drinking (and eating) that less obviously fits the typical hotel bar model.

Little Rituals shares the building’s fourth floor with the hotel pool and fitness center. With signature cocktails and small menu of creative bar food, it’s definitely a place to replenish calories burned in either of those facilities. Unlike the pool and gym, the bar is open to anyone over 21, not just hotel guests. The hotel is about two blocks from the Washington / Central (westbound) and Jefferson / First Avenue (eastbound) light rail stations. Upon exiting the elevator, look for the foyer with a host station, small waiting area, and a beaded curtain.

Little Rituals is the younger, smaller sibling of Bitter & Twisted, the cocktail bar located just a block to the north. Like many second children, Little Rituals resembles the first born, but also makes an effort to differentiate itself. While Bitter & Twisted has a voluminous menu that changes periodically to reflect a new theme, Little Rituals has a more compact cocktail list reflecting its smaller space. There are similarities, however, in terms of strict capacity limits in both establishments, necessitating a waiting room sometimes used during peak times.

The fourth floor space is decorated in a restrained manner than makes it seem sophisticated yet not out-of-place in the beige landscape of a chain hotel. Look upward to enjoy some of the geometric light fixtures and outward to see views of the Warehouse District, the Barrister building, and the Talking Stick Resort Arena. The best view of all, however, may be the mural located at one end of the bar. It’s a panoply of Arizona history and culture featuring landmarks like the Tovrea Castle and celebrities such as Emma Stone and a young John McCain.

For customers who sit at the tables rather than at the bar, the same mural is reproduced in the menu, which is as hefty as an old-fashioned photo album. In fact, the mural makes yet another appearance in one of the 30 featured cocktails listed on the menu. The drink, named “Big City Lights” is a sour with gin, vermouth, and herbal notes. A layer of egg white on the top provides buoyancy to support a miniature version of the mural on edible rice paper. If curious, go ahead and eat it just like any other garnish. It doesn’t have much flavor, but it’s harmless.

The other 29 cocktails include lighter, summery drinks like Touch of Evil with its cucumber flavor and the Daiqurry, a variation of the classic daiquiri with just a touch of spice from dots of Sichuan peppercorn oil scattered across the top. The Cartographer blends rum and bourbon in a semi-tropical mix, and the Careless Whisper, one of a handful of drinks advertised as having lower alcohol content, is based on Madeira fortified wine. Normally thought of as a rich after dinner drink, Madeira works unexpectedly well here in an iced format with blueberries and mint.

Of course, LIttle Rituals’ bartenders can make virtually any known cocktail, not just their house specialties, and beer and wine are also available. Food comes from a hidden kitchen behind the bar, and the menu emphasizes shareable items meant to complement the cocktails. There’s a slight Asian influence with the Pho French Dip and the Caramel Claypot Wings establishing themselves as two early favorites. The sandwich features tender brisket and melted Swiss cheese in a bun with a little mayonnaise. The aromatic broth on the side is ideal for dipping.

The wings are a successful collision of tastes and textures. The chicken is fried until crisp but then immersed in a sauce that is slightly sweet and salty at the same time. Sliced chiles add a bit of fire, and toast points allow for extra absorption of all the flavors. A burger of the moment varies in its topping. When recently sampled, it overflowed with slabs of Brie and bacon accentuated with caramelized onions. A meatless option is the poblano grilled cheese, a sandwich made even better when dipped in the accompanying green tomato sauce.

Another vegetarian choice is the house salad, which can be accessorized with grilled shrimp for an extra charge. The base of romaine lettuce is tossed with pepitas, goat cheese, bell peppers and grape tomatoes to produce a light entree or shareable side dish. The greens are paired with some slices of Noble bread, an ingredient common to many dishes here. Two desserts are offered at Little Rituals. One is a rice pudding with seasonal fruit, and the other is known as “What Pie?”, a decadent slice of gooey filling within an oatmeal cookie crust.

With its semi-hidden location, Little Rituals joins a legion of newer bars in downtown Phoenix that have made partial obscurity a feature rather than a bug. The big windows with their view of the city bely any impression that this place is a speakeasy, though. Instead, LIttle Rituals feels like a place that is worth seeking out because it is more than its setting would suggest. Most hotels have some sort of bar. Nevertheless, an elevator ride to the fourth floor of mid-priced chain is a less common “little ritual” worth cultivating, no matter how unlikely the venue.