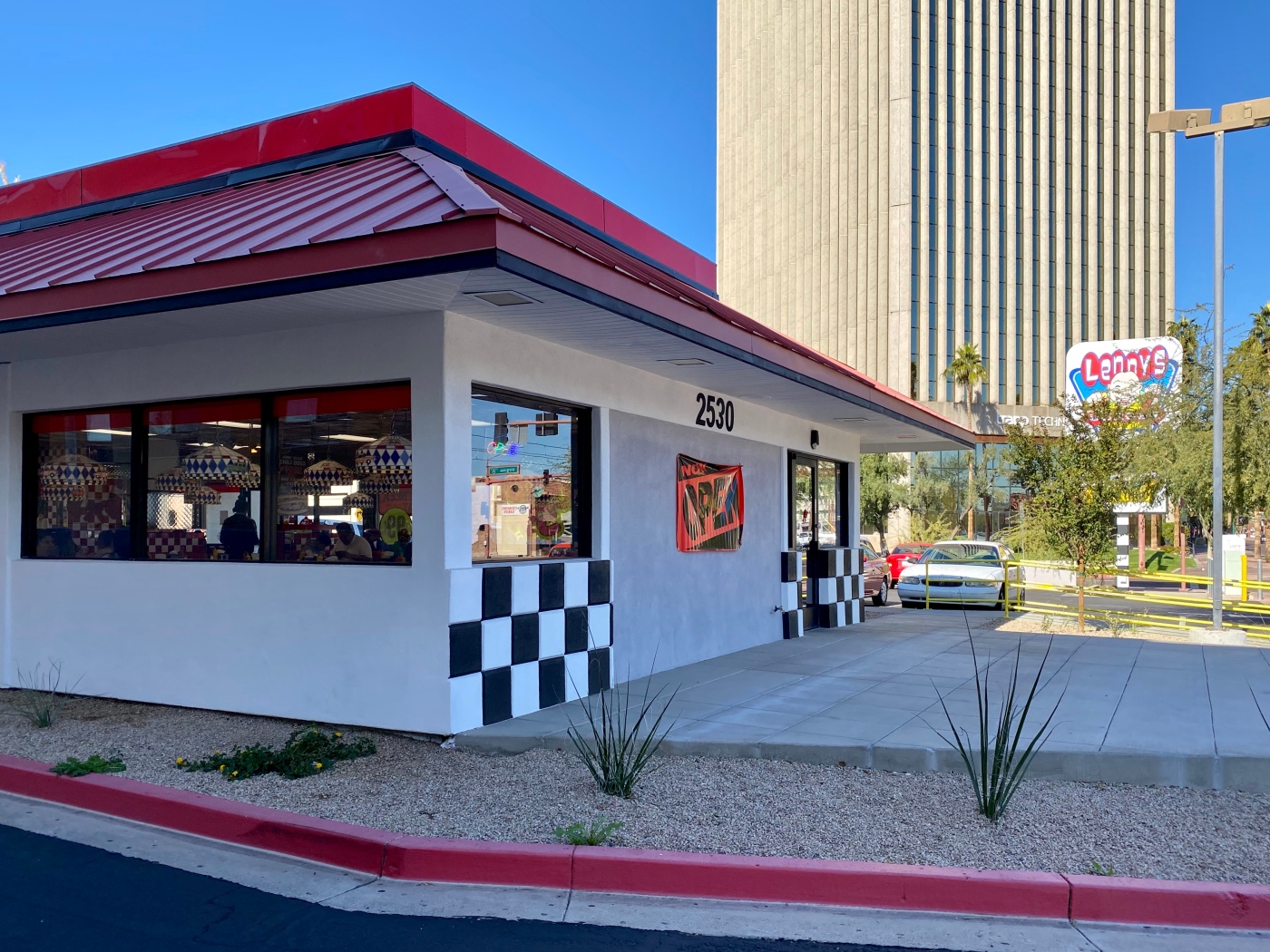 Long before light rail traveled along Central Avenue through the high-rise business district known as Midtown, that stretch of the city’s spine was known for its cruising culture. Cruising meant not only showing off cars and socializing, but also stopping for sustenance. The foods historically associated with cruising have been burgers, fries, and shakes. While cruising now occurs only as part of occasional special events, some semblance of the old cruising culture endures at Lenny’s Burger, a retro-themed hamburger restaurant in the heart of Midtown.

After years in a small retail plaza half a mile to the north, Lenny’s relocated in 2019 to a former Burger King. The fast food space was completely renovated, and with a fresh coat of paint, it is one of several small buildings that fill the gaps amid the office towers, new apartments, and increasing density of Midtown. With its move, Lenny’s maintained a look suggesting “American Graffiti” or “Happy Days” with decor that is a salute to diners of decades past. The walls are quilted metal, the floors are checkerboard tiles, and many of the photos show classic cars.

The location at the intersection of Central and Virginia is halfway between the Thomas/Central and Encanto/Central light rail stations. With its relocation, Lenny’s added a drive-thru, which seems consistent with cruising culture even if it is at odds with the Reinvent PHX goals of encouraging walkable development along the light rail corridor. More concerning is the complete absence of any bike rack at all, despite plenty of room to accommodate one without sacrificing a single parking space. Until that changes, a signpost or parking meter along Virginia will do.

Yes, there really is a Lenny at Lenny’s. Even if founder and owner Leonard Fleszar is not on site at the moment, his presence is clearly felt in this latest iteration of a restaurant that has been in business for nearly four decades. Lenny’s operates as a quick service establishment. Customers line up at two cashier stations near the front, and during the busy weekday lunch hour, the line will sometimes curve towards the front door. Seating is found at tables throughout the sunny dining room, and staff bring the burgers and sides to the table as they are prepared.

Those burgers are, as expected, the main focus here. Lenny’s offers a plethora of different burgers. Most are listed over the counter, but a few new items are noted on a digital sign to the side. The garlic mushroom burger is a patty topped with Swiss cheese, light garlic sauce, and plenty of griddled mushrooms. Lettuce and tomato are optional, as on all burgers. The Mexican burger is layered with yellow cheese, grilled onions, and green chile. Most decadent of all is the Cowboy burger with bacon, cheddar cheese, barbecue sauce, and a few onion rings all within the bun.

All burgers can be doubled with a second patty, and all can be upgraded to combo meals with a side and a fountain drink. The default burger accompaniment is a generous portion of serviceable fries, but a slight extra charge for the sweet potatoes is worthwhile. The fried zucchini and the onion rings, are equally viable alternatives, striking a good balance between crisp and yielding textures. Several sauces are available for dipping, including Lenny’s sauce, similar to ranch dressing, and fry sauce, akin to Thousand Island but without minced pickles. Bottled hot sauces are found near the counter.

Beyond burgers on a bun, Lenny’s diversifies with a patty melt full of ground beef, cheese, and caramelized onions in between two slices of rye bread. The sourdough ranch burger is also based on the concept of a burger with bread rather than a bun, but with without cheese. Pastrami appears a few times on the menu, as a burger topping and in a Reuben sandwich. Chicken sandwiches are available with either grilled or crispy breast meat accentuated with mayonnaise, lettuce, tomato, and onions. A fish sandwich features a slab of breaded cod similarly prepared.

For something with a bit of heat, a Buffalo chicken sandwich is a more recent addition. A simple chili con carne of ground beef and beans is offered as a topping for hot dogs and even French fries in a sort of variant of poutine. Anyone looking for a meatless meal at Lenny’s can find a minimally adorned veggie burger, as well a simple grilled cheese sandwich. Chances are no one visits Lenny’s to order a salad, but if one member of a group prefers that option, a standard mix of iceberg, cucumbers, and tomatoes is available with the option to top it with chicken or tuna.

With its business coming mainly from the lunch needs of nearby Midtown office workers, Lenny’s closes early in the evening. Those hours, coupled with the emphasis on diner fare, rule out a liquor license. Here, liquid indulgence is more likely to take the form of a milkshake than a cocktail. To that end, Lenny’s offers sundaes, milkshakes, and even banana splits. Keep in mind, however, that the emphasis in the small kitchen is on burger and fries, so it’s not entirely surprising, even if a little disappointing, that packaged bases and powdered flavors are used for the frozen desserts.

While it’s sometimes argued that allowing high-rise development in Midtown undermined Phoenix’s true downtown two miles to the south, the office towers along Central are here to stay. The population they bring, augmented by parallel efforts to follow up with residential construction, makes this area one that is likely to be gradually converted to higher density and enhanced walk appeal. Nevertheless, a few reminders of Central’s earlier role as a cruising corridor remain. With its newest location in Midtown, Lenny’s Burger re-creates the car culture cuisine of that neighborhood’s past.