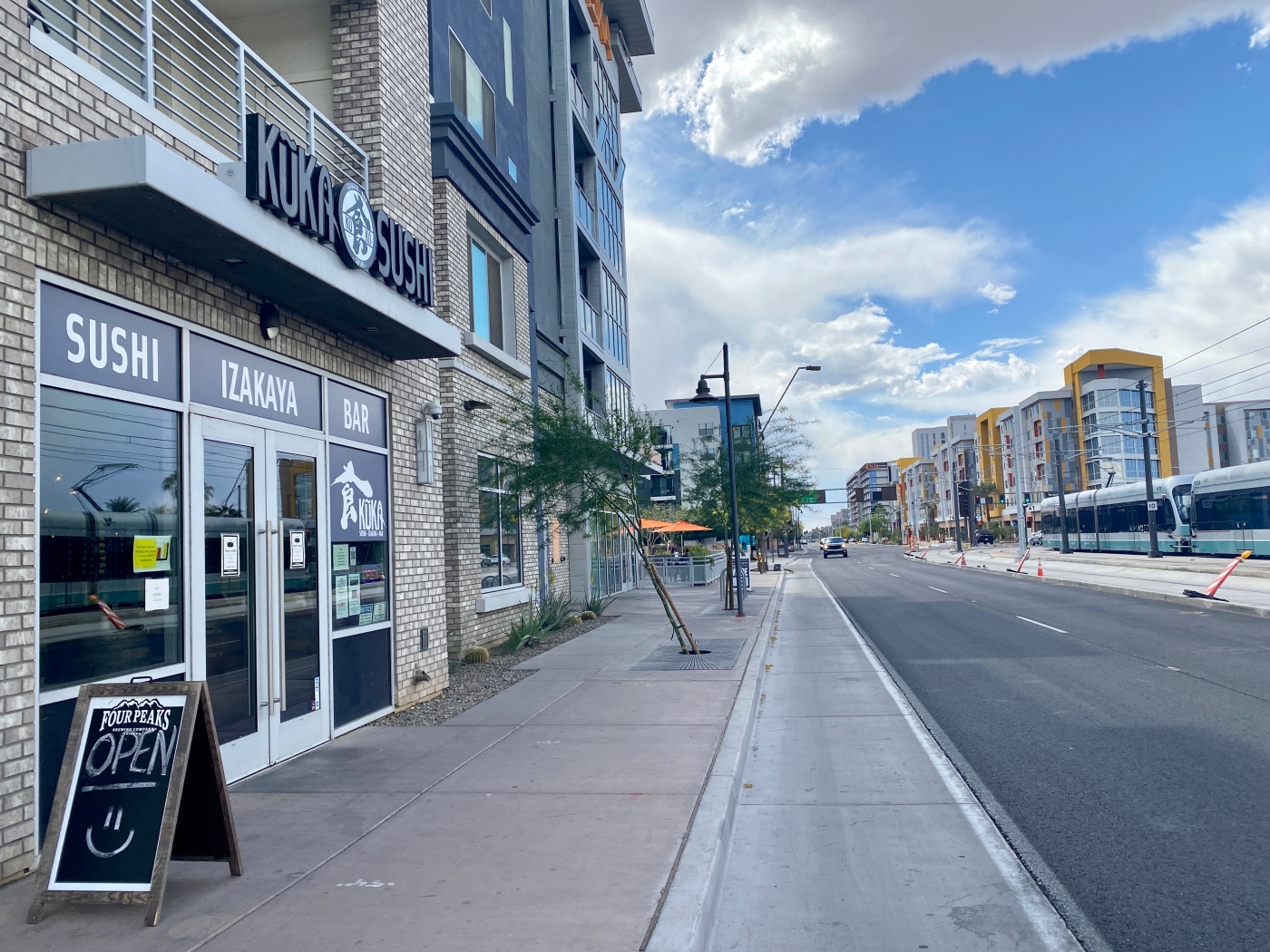 Over the past decade, Apache Boulevard in Tempe has begun a transformation from a low-rise corridor of motor hotels, mobile home parks, and strip malls to a canyon of multi-story apartment buildings. A few restaurants have been lost in the process when the land they occupied was sold to developers looking to build with more density. At the same time, many of the new complexes have ground floor retail spaces providing opportunity for new businesses to grow. One of the new breed on Apache is Kuka, which identifies itself as a sushi bar and izakaya.

Kuka serves an assortment of Japanese foods from a spot in the mammoth Nexa apartment development and is situated just a block west of the Dorsey/Apache light rail station. Bike racks are found next door by Press Coffee. Like the Nexa building, Kuka is a bright, modern space. There’s no outdoor dining, but most tables have views of the street and plenty of natural light. A sushi bar is found near the entrance, just past the host station, with a large open kitchen directly behind it for preparation of the cooked tavern-style foods from the izakaya half of the menu.

The sushi bar produces a gamut of standard nigiri and sashimi, as well as a selection of original hand rolls. If unclear about how to proceed, the best option is one of the omakase meals in which the chef’s selection of fresh fish is plated on a wooden platter with miso soup and a small side dish like a cucumber salad. At lunch, the choices of meal size are given straightforward names such as Kuka Delight, Kuka Special, Kuka Premium, and Sashimi Deluxe. In the evening, the dinner choices have more playful labels of Buzz, Drunken, and Hammered.

The paper menus used for ordering sushi on an a-la-carte basis include the usual range of multiple varieties of tuna, salmon, mackerel, shrimp, scallops, squid, eel, octopus, sea urchin and even beef brisket. More inventive ingredient combinations are found on the “Drunken Chef” and “Crazy Roll” segments of the list. The New Mexican hamachi involves slivers of Pacific yellowtail topped with slices of jalapeño and sprigs of cilantro to create a Southwestern flavor profile. The green chili roll is a similar mix of tastes in a rolled format rather than a sashimi plate.

The paper sushi menu is also the place to find individual small plates of grilled foods on skewers. These yakitori items can be as simple as a gently seasoned potato or as unpredictable as shishito peppers with varying levels of spiciness. The meats include seafood choices such as scallops and small shishamo smelts, red meat like short rib or pork belly, and various parts of the chicken, including not only breast, thigh, and wings, but also hearts and gizzards for the bold. Most of the yakitori choices come with a choice of marinades, usually shio, tare, or spicy.

The cooked food extends beyond small bites of yakitori to full-fledged entrees from the kitchen. Noodle dishes incorporate ramen, soba, and udon. Several bowls of noodle soup are served, including the namesake Kuka ramen with a creamy broth and miso ramen with a fermented soy base. A unique option is the vegetarian tomato ramen. This meatless bowl is full of an intense soup accentuated with roasted vegetables such as slivers of Japanese eggplant. All the soup entrees can be accessorized with a choice of chicken, pork, beef,or tofu as a protein source.

Without broth but containing plenty of starch, a bowl of yakisoba is elegantly accentuated with flakes of bonito dancing above the noodles. Plated entrees include teriyaki chicken, indulgent pork belly, galbi-style short ribs, or miso-glazed salmon served over rice and a bed of julienned, lightly sauteed vegetables. A dark red, thick curry is paired either with a cutlet of breaded tonkotsu pork or a patty of Japanese hamburger steak that blends ground beef and pork resulting in a finished product bearing a resemblance to meatloaf or Salisbury steak.

Tempura, prepared with a light batter, presents itself in a small assortment on the appetizer menu, where it is joined by favorites such as edamame, karaage fried chicken, seaweed salad, and pork gyoza. A larger tempura plate is also offered with plump shrimp and an assortment of vegetables that can include sweet potato, winter squash, eggplant, and whatever else may be in season. Many of the platters come in small and large sizes, and all of the plated entrees are accompanied by a bowl of miso soup and a small salad with citrus-tinged wafu dressing.

Compared to the extensive offerings of the sushi, yakitori, and cooked food menus, the dessert list is succinct with an emphasis on fruit flavors. That approach leaves room for choices like kiwi sorbet or mango mochi. Most interesting of all among the desserts is the wine-infused blueberries, another frozen treat. The beverage selection incorporates a selection of bottled Japanese beers, Kirin and several local brews on draft, Japanese sake and sochu fermented grain beverages, daily cocktail specials, and an assortment of mostly American wines

Happy hour each afternoon provides the opportunity for discounts on selected popular items from the sushi bar as well as certain cooked appetizers. With a fairly sophisticated menu and approach, Kuka does not feel like it’s in a race to the bottom to attract a large student crowd from ASU dormitories, but it is situated to appeal to residents of Nexa and other nearby apartment buildings that have sprouted along Apache Boulevard as the corridor experiences inevitable change. Among the many steps along the way, Kuka is one in a positive direction.