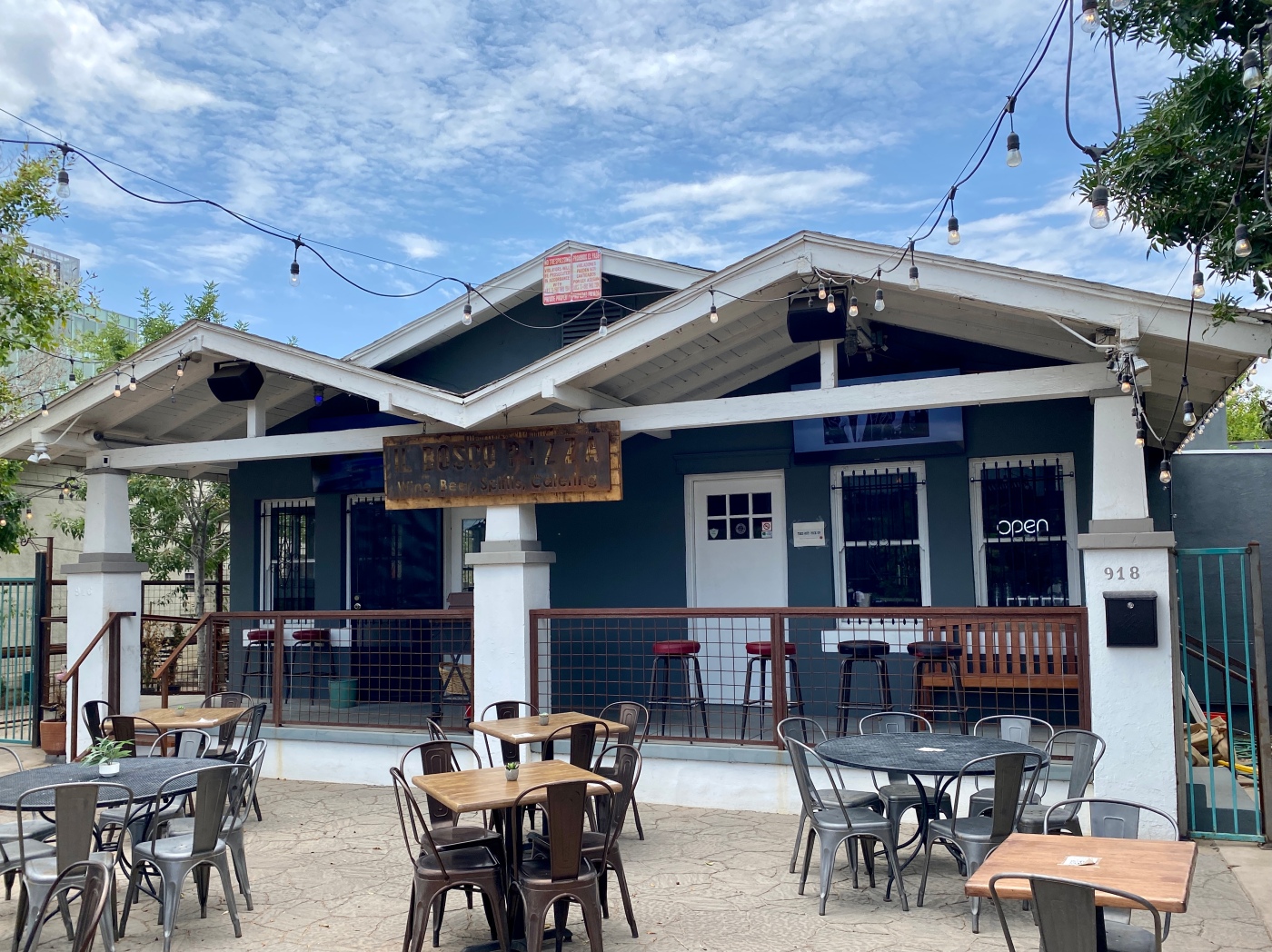 There’s an overused and sometimes misunderstood metaphor about not being able to see the forest for the trees. Seinfeld character Elaine Benes probably summarized the unspoken reaction of many people when she said “Yeah, I don’t know what that means.” On Fifth Street in the Evans-Churchill neighborhood just north of downtown Phoenix, there are a few trees lining the sidewalks, and now there’s IL Bosco, Italian for the forest, a new pizzeria that takes its name from both the original owner’s surname and the use of a wood-burning oven to produce its pies.

Phoenix doesn’t have enough trees, despite repeated pledges to plant more, but it does have plenty of outstanding wood-fired pizza. The market might seem crowded with places like Bianco, Cibo, and Pomo all nearby, but Il Bosco defines its own niche in a location just off Roosevelt Row and five blocks east of the Roosevelt/Central light rail station. Look for an old house with an attractive patio on the west side of Fifth. Bike racks are found right across the street. The host station is located on the front porch with a small dining room found inside behind it.

IL Bosco is cozy in terms of its space and focused in its menu. The approach taken to the restaurant’s 12-inch pies is not rigorously Neapolitan, but the ingredients and toppings are predominantly Italian, and the results are consistently good pizza with a crust of medium thickness, slight chewiness, and just a bit of char. There are roughly twenty pies on the menu, and for the most part, they have traditionally female first names to identify them. The Adriana, for example, is a classic Margherita pizza topped with red sauce, mozzarella, and basil leaves.

Vegetarian favorites include the Patrizia with red sauce, mozzarella, artichoke hearts, cremini mushrooms, and peppadew peppers, a South African variety that is small in size but packed with both sweet and spicy flavor notes at the same time. The meatier Divina combines those same peppers with both prosciutto and sopressata. While most of the pies involve tomato sauce, a favorite white pizza is the Biaggia, which mixes the tastes of fig jam, prosciutto, goat cheese, arugula, shaved parmesan, and lemon olive oil with the usual fresh mozzarella.

Beyond the permanent menu, there are often specials such as the Mariangela, topped with pesto, garlic, cherry tomatoes, and mozzarella before being finished with burrata and Parmigiano-Reggiano. Another option is a semi-secret off-menu pie known as the Za. In a departure from the practice of using women’s names, this pie is named for local Instagrammer the Wizard of Za, known for his enthusiasm for pizza, craft beer, and all things spicy like the pepperoni, sausage, and multiple varieties of chilies and peppers that top this fiery creation.

Although pizza is the main attraction here, IL Bosco’s appetizer menu, which is discounted at happy hour, offers plenty of options not only as shared starters, but also as a lighter meal option. The vibrant red peppadews that are featured on so many of the restaurant’s pizza are also served stuffed with spicy Italian sausage, each one functioning as a sort of high-intensity hors-d’oeuvre. The fried ravioli benefit from a nicely crisped exterior and a molten interior, and the salsa di parmigiano is a unique dip of cheese, garlic, and herbs with accompanying crostini.

Salads include not only a standard Caesar with romaine, parmesan, and croutons, but also a spinach kale Caesar that combines to types of leaves, sauteed baby spinach and hearty raw kale, in one bowl with a little bit of pancetta to impart a salty, smoky note. The caprese salad is IL Bosco’s version of the classic combination of tomatoes, mozzarella, and basil enlivened with creamy burrata and dressed with both pesto and a balsamic reduction. The chop salad is perhaps the heartiest with sopressata and cherry tomatoes mixed with greens and cheese.

Desserts include Italian restaurant classics: miniature cannoli sized for one, a Neapolitan tartufo, and vanilla gelato, served either by itself or as part of a root beer float. The largest of the sweets in a shareable chocolate chip cookie skillet that combines a warm pastry base layer with a cool frozen topping in a contrast of tastes, textures, and temperatures. These options don’t have quite the same level of originality as IL Bosco’s distinctive pizza toppings, but they’re all suitable ways to end a meal in a manner that is satisfying but not overwhelming.

Although IL Bosco is a recent arrival on Roosevelt Row, the restaurant has plans for expansion, in terms of its menu and its location. The restaurant has foreshadowed new happy hour menu additions to come and the current owner has recently mentioned the prospect of expansion into Old Town Scottsdale and Gilbert. Despite this anticipated growth, Il Bosco’s compact interior and menu keep the restaurant anchored on its current mission. There are trees outside, with hopes for more coming to Phoenix streets, but the forest inside is the destination for pizza.